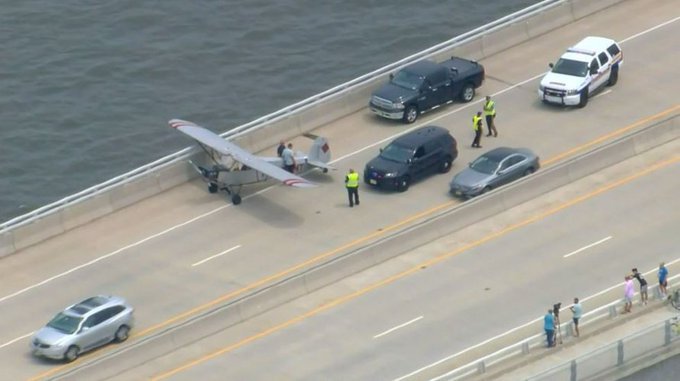 An 18-year-old pilot made an emergency landing on a New Jersey bridge in the middle of traffic after experiencing an engine problem.

Landon Lucas was flying a small plane for Paramount Air Service, and he reported an engine problem while flying near Steel Pier in Atlantic City, New Jersey, at around 12:30 pm on Monday.

The 18-year old was able to release his banner into the ocean and then spotted a gap in traffic in the westbound lanes, where he made a safe emergency landing. He was trying to return to Ocean City Municipal Airport after releasing the banner.

Lucas landed the plane safely with no damage to his plane and no injury to himself or anyone on the bridge. People are giving Lucas kudos for safely landing the plane. One of the women said:

“We rode up and couldn’t believe what we were seeing. It’s a really young pilot, and what an amazing job he did. It’s incredible that he was able to pull this off.”

Police officials are investigating this event and said that the banner plane would be towed away shortly.