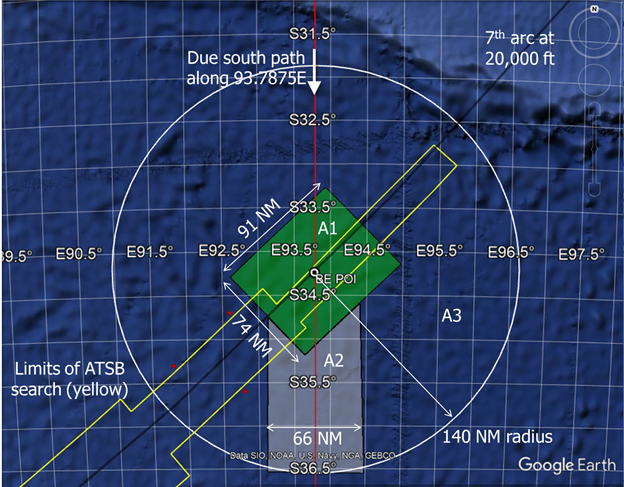 The last search for MH370 was conducted by Ocean Infinity, who consulted with official and independent researchers and subsequently scanned the seabed along the 7th arc as far north as S25° latitude.

Since then, independent researchers have continued to analyze the available data to understand what areas of the seabed are the most likely, and why previous search efforts have been unsuccessful.

“In a previous post, we presented an overview of Bobby Ulich’s research, aimed at more precisely locating the point of impact (POI) using statistical criteria that require that random variables (such as the reading errors of the satellite data) are not correlated, i.e., are truly random. A subsequent post describes the work of Richard Godfrey et al. to analytically evaluate a large number of candidate flight paths using these and other criteria. The results of that work suggest that the final hours of the flight were due south in the Indian Ocean along E93.7875° longitude, which matches a great circle between the waypoint BEDAX (about 100 NM west of Banda Aceh, Sumatra) and the South Pole. The POI was estimated to lie close to the 7th arc around S34.4° latitude.”

This would be about 1800km due west of Dunsborough, Western Australia.

The map shows the new areas to be searched for MH370 in green (A1), grey (A2) and then A3. The area previously search by the Australian Transport Safety Bureau is highlighted in yellow.