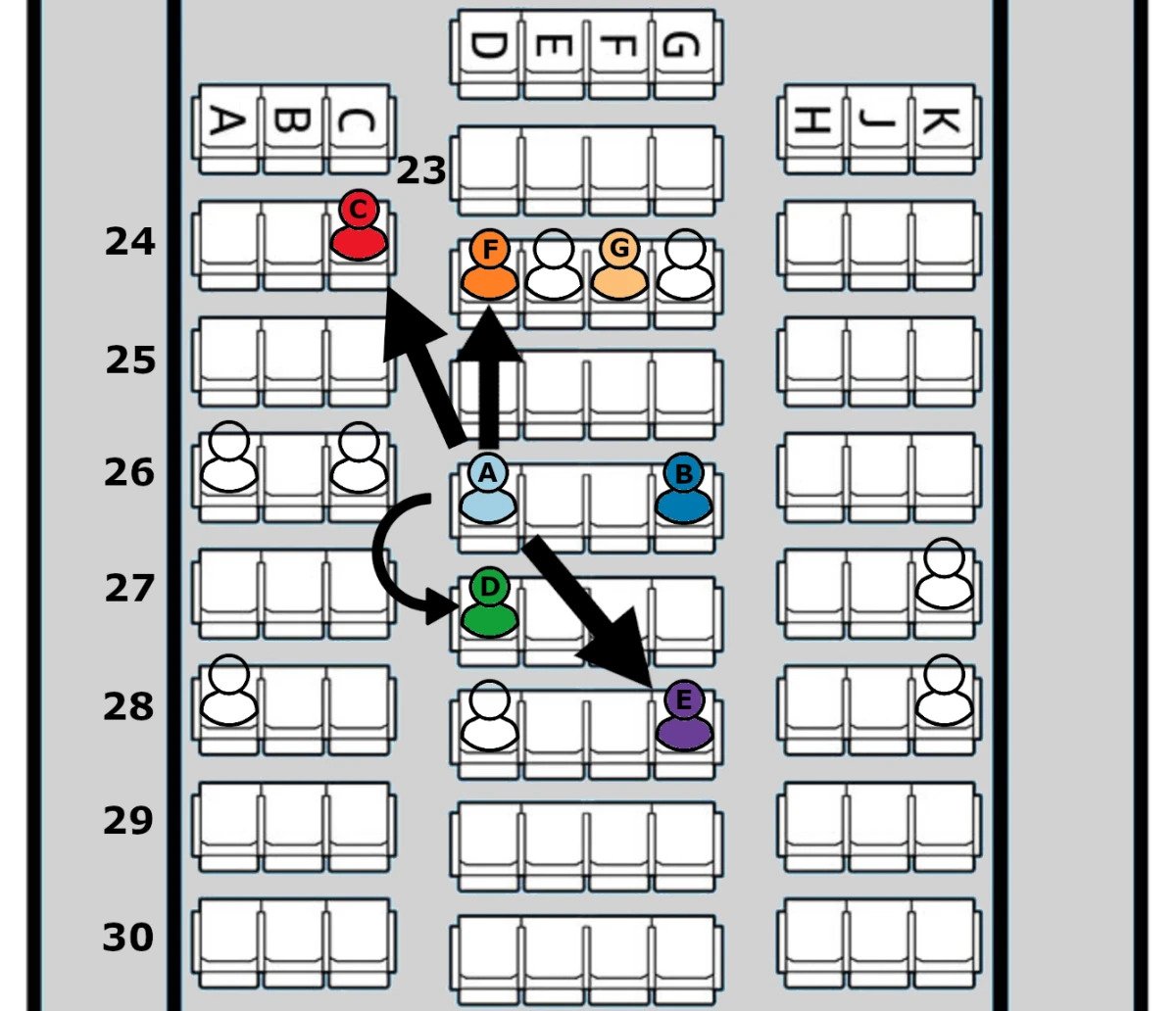 A new study shows how Covid-19 spread on an 18-hour flight from Dubai to Auckland, eventually infecting four people on-board.

On September 28, Emirates Airlines flight 448 departed Dubai for Auckland with 86 passengers on board and a full complement of aircrew. The researchers say, at least four people were infected on the 18-hour flight to Auckland.

Sitting in seats 26D and 26G, a couple from Switzerland are suspected to be the root of the small chain of transmission.

The couple took Covid-19 tests on September 24, three days before they left Zurich for Dubai. Those results came back negative. But after arriving in New Zealand, one of the two began to develop symptoms.

Labelled Case A, this person began to experience muscle pain and general weakness on October 1, two days after arriving in MIQ. Their partner developed symptoms – the same as Case A, plus a cough and a runny nose – the next day both of their Day 3 tests came back positive. The Ministry of Health considers people to be infectious two days prior to symptom onset, so Case A is treated as the only person who was infectious on the plane, although Case B may have been infected at the time.

Case B, the researchers say, was likely infected by the same source as Case A or by Case A themselves.

The rest of the Day 3 tests for EK448 were negative as well – except for one, labelled Case C. Case C was asymptomatic for the entire course of their illness, according to the study, and sat in seat 24C. That’s directly across the aisle and two rows in front of Case A. They travelled from Kiev, in Ukraine, to Dubai before boarding EK448.

This appears to have launched a bevy of retesting of potential close contacts of the trio of new cases. From October 6 to 8, people sitting within two rows of the new cases were swabbed. Case E, who also didn’t develop symptoms over their illness, returned a positive result on October 6. They were sitting two rows behind Case B and had come to Dubai from Kochi, India.

Case D, who sat directly behind Case A and flew to Dubai from Dublin, developed congestion, headaches, a head cold, muscle pain and other symptoms between October 4 and 7, at which point they tested positive.

Case F developed congestion and a cough on October 2, but returned a negative Day 3 test that day. They had come to Dubai from Johannesburg with three other family members, including the eventual Case G. When the four were retested on October 8, Cases F and G tested positive while their two family members came back negative.

At the time the results came back, Case G was asymptomatic, but they developed congestion and a sore throat the next day. The family of four sat two rows in front of Cases A and B, but swapped seats throughout the flight.

The researchers believe that Case G was not infected on the flight, but was instead infected by Case F while sharing a room in managed isolation. Covid-19 can incubate in a person for up to 14 days before symptoms develop, but the average is much closer to five. That makes it unlikely (but not impossible) for Case G to have been infected on September 28 but only develop symptoms 11 days later.