A Regional Express (Rex) Saab 340B suffered an engine fire 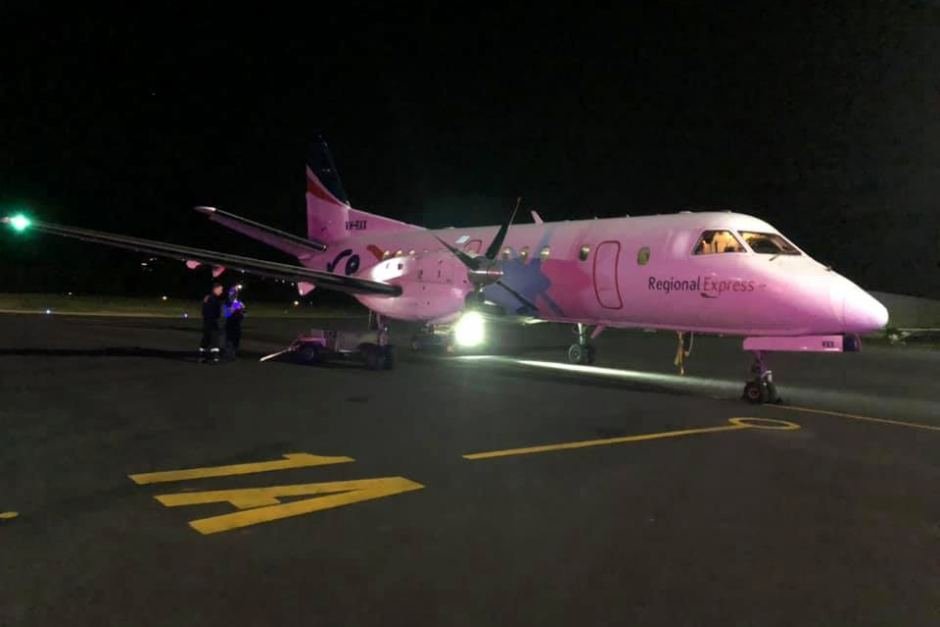 A Regional Express (Rex) aircraft reportedly suffered an engine fire Thursday night. Passenger Vicky Hodges posted on social media, “I hav (sic) just had the most terrifying experience of my life from home from Sydney on REX ZL139. Engine blew up just out of Moruya so flew 40 minutes on 1 engine. The wonderful pilots got us home safely.”

Another passenger, Bill Deveril, told The New Daily, “There was a loud bang. I could see out and noticed the propeller was not going around, but the plane just flew exactly as it flew the day before when it went to Sydney with two engines. I don’t think people really knew that the motor was out. Being dark, I didn’t take much notice because I was doing a crossword. The pilots did a great a great (sic) job. When the plane stopped, I called for three cheers.”

Rex flight ZL139 flies Sydney to Merimbula, with a stopover in Moruya.

The flight was flown by a Saab 340B, registration VH-RXX.

The aircraft spent some time in a holding pattern over the ocean before coming in to land.

Fire and Rescue NSW (FRNSW) Eden posted on Facebook, “FRNSW EDEN was called to Merimbula airport tonight at 20:17 hours, Rex plane had a (sic) emergency landing at Merimbula airport on Thursday night. The emergency response plan for airport emergences was activated and, once emergency agencies were in place at the airport, the aircraft made it (sic) successful landing with one engine shut down. Emergency services were told prior to the plane landing, plane had an engine fire which had been extinguished by the pilots. The plane landed safely and landed as normal. None of the passengers or crew were injured, large contingency of emergency services attended the call, FRNSW three appliances, RFS [Rural Fire Service] three appliances, NSW police and NSW Ambulance service where (sic) at Merimbula airport.”

FRNSW Merimbula 395 also posted on Facebook, “29/8/19 20:10 RP395 ,T395 Merimbula P286 Eden, 3 xRFS crews Police and Ambulance responded to Merimbula Airport. On arrival a 34 seat Aircraft with 19 passangers (sic) and 3 crew was on final approach with an engine fire in starboard engine. Aircraft crew had shut down engine extinguishing the fire before making an emergency landing. Aircraft landed safely. Passegers (sic) were evacuated to terminal to be accessed (sic) by Ambulance crews. FRNSW accessed (sic) the engine with the use of a Thermal imaging camera and declared the Aircraft safe. An excellent job by flight crews averted a more serious incident.

However, Civil Avation Safety Authority (CASA) spokesperson Peter Gibson told the Canberra Times that they had been informed by the airline the emergency was due to a “cockpit sensor alert,” and that there was no sign of fire when the engine was inspected. “The information we’ve been given from REX is that there was not an engine fire, there was a mechanical failure which triggered an engine fire warning. There was excess heat created inside the engine so there was a red glow. We’ll continue to get reports from REX engineers as they strip the engine down. They haven’t pinpointed the cause of the engine failure yet.”

The incident comes less than two months after CASA cleared Rex in an investigation over safety claims. A former Rex engineer and the Australian Licensed Aircraft Engineers Association had complained that the airline discourages the reporting of maintenance defects. Rex had responded saying the allegations were “wild accusations from a disgruntled employee.”

A prop has previously fallen off another Rex Saab 340B in March 2017. That aircraft made a successful emergency landing at Sydney Airport.

Full statement from Rex on ZL139:

Regional Express (Rex) flight ZL139 operating from Sydney to Merimbula, 29 August 2019, experienced a cockpit sensor alert associated with the aircraft’s right engine en route to Merimbula. In accordance with the manufacturer’s standard operating procedures, the flight crew conducted the applicable checklist actions which included an engine shut down. Upon completion of all the checklist actions, the cockpit sensor alert ceased. The aircraft landed safely and without any further incident at Merimbula airport at 8:42 pm.

Both the Civil Aviation Safety Authority (CASA) and the Australian Transport Safety Bureau (ATSB) were immediately briefed on the event and will be continually updated on any new information as it becomes available.

Mr Peter Gibson, of CASA, has stated that reports of a fire in the right engine are probably explained by passengers seeing sparks but, “observations this morning don’t show the presence of fire”.

Mr Gibson further stated that it is not right to link recent allegations relating to Rex to this incident. “People shouldn’t jump to conclusions. This doesn’t happen often, but it does happen to airlines big and small, that’s why there are redundancies in place.”

The Saab 340 aircraft is designed and certified to climb, cruise and land safely on one engine which explains why the General Electric (GE) engines on the Saab 340 have clocked over 30 million hours with an impeccable safety record.

Rex Engineers are currently examining the aircraft engine and can confirm that there is no evidence of an engine fire.