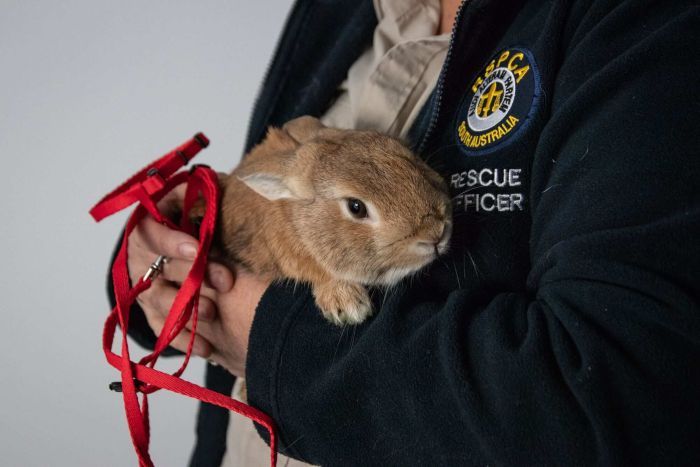 The bomb squad was called by Australian Federal police (AFP) after an abandoned Lorna Jane bag was found inside the women’s toilets. Inside the bag the squad found a male rabbit wearing a red harness.

After the find the AFP called the Royal Society for the Prevention of Cruelty to Animals (RSPCA) animal ambulance. RSPCA officers took the rabbit to their base where it spent the night. RSPCA rescue officer, Nalika Van Loenan told ABC News Australia, “This is the first job of this kind that I’ve come across in my 26 years of service with the RSPCA. The young male rabbit is clearly very-well socialised and cared for. He is even harness-trained. The police had put him in a large box and [got] some carrots from Subway, so he had some fresh shredded carrot to munch on while they waited for me to arrive.”

Is this some bunny that you used to know?AFP bomb appraisal officers were called to investigate an abandoned bag in…

AFP acting state manager, Commander Brett McCann also told ABC, “We treat everything in the aviation space very seriously, but our bomb appraisal officers certainly weren’t expecting to find a rabbit in unattended baggage. Thankfully, the rabbit is safe and well and hopefully the owner will be found.”

The RSPCA is asking for information from anyone that may know who dumped the one year old dwarf rabbit.

Ms Van Loenen said, “A couple of scenarios came to mind — his owner could have been leaving the country and knew by leaving their pet in a populated area he would be found and cared for. Or they may have been planning on smuggling him on board a plane, but backed out at the last minute. The pink Lorna Jane bag is very distinctive, so we really hope someone noticed it and saw something.”

MEDIA RELEASE: A bag left inside #Adelaide Airport’s female toilets last night caused a security scare, with Australian Federal Police calling in the bomb squad to investigate – only to find an abandoned #rabbit inside. https://t.co/BbJAkphsFy