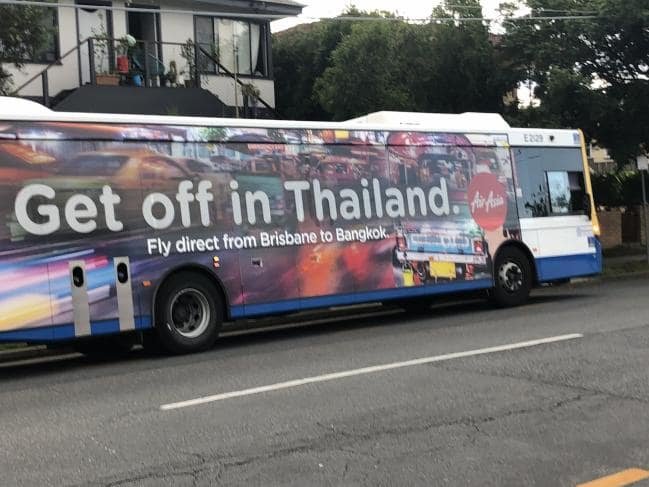 AirAsia has apologised and withdrawn an Australian ad campaign over complaints it was a “dog whistle” for sex tourism.

The campaign involved ads on the sides of Brisbane buses with the wording “Get off in Thailand. Fly direct from Brisbane to Bangkok.” The ads were noticed by Collective Shout, “a grassroots movement against the objectification of women and sexualisation of girls in media.” Collective Shout spokesperson, Melinda Liszewski, told News Limited, “Brisbane City Council is profiting from these horrific endorsements of sex tourism. The information I have is that 250,000 western male sex tourists visit Thailand with the purpose of sex with impoverished women and children. Sex in these circumstances amounts to rape and child sex abuse. I believe this advertisement is for those men.”

Brisbane City Councillor, Kara Cook told the Brisbane Times, “This advertisement is completely inappropriate and makes light of the appalling situation facing many women and children who are victims of sexual exploitation in Thailand. We know that Thailand has high rates of human trafficking and sexual exploitation of women and children, this is a serious issue and these buses should be immediately removed from circulation. Council cannot sit on their hands when it comes to council-owned buses. We have a responsibility.”

Today I spoke w @TessaHardy9 about this issue & told her that Brisbane City Council should be responsible for what is advertised on its buses.

This ad was an absolute disgrace and should never have appeared on our City’s streets.

An AirAsia spokesperson told Australian media, “We take community feedback extremely seriously and sincerely apologise to those who have raised concerns. The campaign has since ended and our media partners had the last of these advertisements removed yesterday.” The airline also told Reuters the campaign was to promote Bangkok as a destination, “for example, get off the bus get…off the aircraft in Bangkok.”

There was also a billboard of the campaign at Brisbane Airport. The airport noted on twitter that the billboard will be removed as a priority.

This billboard is being removed very shortly. There are some logistical challenges, but this is a priority.