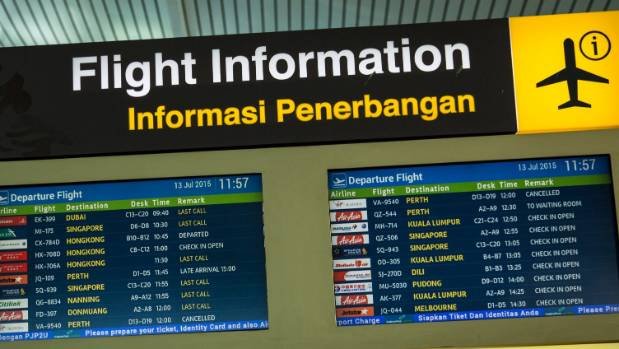 A mother is asking why her son was able to fly from Sydney to Bali by himself without permission.

After going to Bali for holidays every year, Emma’s son, Drew asked if he could go to the Indonesian island. (Both names are pseudonyms). When he was told no, he went online and researched which airlines allowed 12 year olds to travel alone.

The Guardian reports Emma received an alert on her credit card and rang the bank the find out that Drew had booked himself a one-way ticket to Bali plus one weeks accomodation. Emma said she called the police. He then went to school but he didnt return home so she called the police again, who found him near Sydney Airport. She says an Australian Federal Police (AFP) officer told her they would flag his passport and not to worry as he would never get past authorities and onto a plane.

Drew made a second attempt the next day. A police officer returned his passport at the police station while waiting for his father to come and collect him.

The AFP told The Washington Post that they were notified March 8 that Drew had attempted to fly to Bali, but they didn’t place an alert on his passport because he didn’t have a criminal record. The AFP said it didn’t have the power to request Department of Foreign Affairs and Trade cancel a passport unless someone was suspected of committing specific criminal offences.

Garuda Indonesia and Qantas had refused him boarding because he didnt have a letter from his parents. They also reported his attempts to the AFP and Australian Border Force (ABF). After the two airlines refused he got got a refund on the tickets and bought another ticket on a flight to Perth with Jetstar – no questions asked.

“Drew” borrowed the family credit cards and tricked his nan into giving him his passport – and that’s just the beginning. #9Newshttps://t.co/lkSU8Gs8d3

Several days later, while staying at his grandmother’s place, Drew tricked her into giving him his passport and told her he was leaving for school. Instead he went to the train station on his scooter before catching a train to the airport. Once at Sydney Airport he used self-serve check-in to get on the flight.

Emma reported Drew as missing when the school notified her that he hadn’t turned up.

When he arrived in Denpasar he told Immigration his mother lived in Bali and was waiting outside. (Australians don’t require a visa to travel to Bali.)

When he arrived at the Four Seasons Hotel in Bali he told the staff he was checking in before his sister arrived. He then hired a motorbike, spent his days at the beach and bought a beer, taking a sip before throwing it away. He stayed there for four days before his location was found by friends via social media posts. After police arrived at his room, he locked the door and braced it with a chair. The police then unscrewed a window and gained access to the room. He was taken into custody by Indonesian police at the request of the AFP.

Because of his age and Drew in a police station dining room under the watch of Australian Consular Officials, fearful he would try to run again. As he had committed no crime in Indonesia he could only be held for a maximum of 24 hours.

The Department of Foreign Affairs and Trade (DFAT) told Drew’s parents they would need to fly over and bring him home themselves. All direct flights were booked so Drew’s parent’s also had to fly via Perth. Jetstar then prevented them from boarding saying they didn’t have a return ticket and they would need to purchase one now. They were then allowed to board after signing a waiver. The saga cost the family $8000 ($US6100, £4300, €5000)

TV show A Current Affair, has reported that Jetstar has since changed it’s policy requiring parental permission for minors. And the AFP has said, “the AFP will work with partner agencies to review the circumstances of this matter and current operating procedures, to ensure this type of incident does not occur again.”

Agence France Presse says, “In general, Australian airlines do not allow children younger than five to travel alone. Children between five and 11 must be booked on an unaccompanied minor ticket while those from 12-15 are required to have a permission slip from their parent or guardian.”