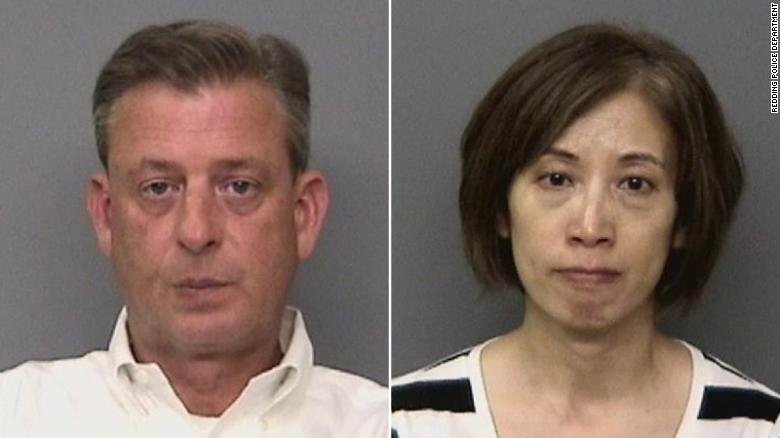 A pilot at a Californian flight school and his assistant have been arrested after kidnapping and attempting to deport a Chinese flight student back to China.

Jonathon McConkey is a pilot, qualified flight instructor and general manager of IASCO Flight Training School. He is alleged to of carried out the kidnapping with his assistant and ground instructor Kelsi Hoser. The school in Reading is contracted with the Chinese civil aviation authority to train new pilots.

Twenty one year old Tianshu “Chris” Shi has been in the US for 7 months training at the school. It is alleged that McConkey and Hoser visited Shi at his apartment last Thursday where they told him, without explanation, to pack and be ready to leave for China the next morning.

Shi told the Record Searchlight he was unsure why they wanted him out of the country, but did say he was banned from flying two months ago and suspected his lack of English was the reason. “I can’t speak English well in life, but I can speak English well with air traffic control.”

McConkey and Hoser returned at daybreak Friday. Shi told them he wasn’t going and he began recording the conversation.

A partial transcription as published by the Record Searchlight:

“You’re going home, with or without your luggage.”

Then, the woman raises her voice and switches to English, demanding that Shi do the same.

“If you cannot speak English, you are not going to be able to stay here.”

Shi is heard faintly referencing the documents he says he hasn’t received. The man replies that Shi is in his custody.

“Do you understand what in my custody means? Do you understand? It means I will forcibly remove you,” The male voice says. “If you want the police to come with guns, I got you on that. Alright? You ass is leaving right now. Let’s (profanity) go.”

The man’s voice is heard saying he has Shi’s passport.

“Boy, don’t (profanity) with me, do you understand?” the male voice says.

Shi asks if the man is threatening him.

“Your ass is getting on the plane right now or I’ll break your (profanity) arm. You better believe I’m (profanity) threatening you. And the United States government needs you out of this country right now, you understand?” the male voice says.

“You are here illegal, you know that. If you don’t go with us, you go to jail,” the female voice says.

“You’re going to jail if you don’t go with me,” the male voice adds.

Police found the three of them at Redding Municipal Airport where McConkey and Hoser were arrested with Conspiracy and Kidnapping. As of Friday the two are being held on $100,000 each.

Zhang Xun Yi, 24, another Chineses student has also alleged the two instructors had previously tried expelling him in similar circumstances. Yi was grounded 3 weeks ago. He believes it was due to him allowing a friend to use his restroom at home.

Yi told the Record Searchlight that he was being sponsored by Xiamen Airlines to the tune of $90,000 in order for him to attend IASCO. If he doesn’t complete the training he and his family will be required to pay the money back.

On May 25th, 2018 at approximately 7:18 A.M., Redding Police Department Officers respond to a reported kidnapping at 1400 block of Trudie Trail in Redding. The Victim, who was identified as TIANSHU SHI, is a pilot in training at a local flight school. The Victims brother, BAIHAN FU who lives in Shanghai China, spoke to SHI this morning. SHI told him somebody was at his apartment to take him away. When SHI’s brother did not hear back from him a short time later, he called and spoke to another flight student who told him SHI was just assaulted and taken away. FU subsequently called the Redding Police Department to report the kidnapping.

During the investigation officers learned Jonathan MCCONKEY and his assistant, KELSI HOSER responded to SHI’S address last night to advise him they are sending him back to China. They responded back to SHI’s residence this morning to carry out this action. When SHI refused, MCCONKEY battered him, and threatened physical violence if he did not go with them. SHI ultimately left with them in fear for his safety and was transported to the Redding Municipal Airport to be sent back to China. Officers located SHI, MCCONKEY and HOSER at the airport.

MCCONKEY and HOSER were both ultimately arrested and booked for conspiracy and kidnapping.

SHI sustained only minor injuries and was later released by Police.