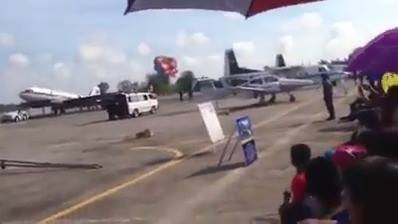 The 35-year-old pilot was flying a Swedish-made JAS 39 Gripen jet.
Thailand’s national Children’s Day is celebrated yearly on the second Saturday of January.

Footage of the accident captured shrieks from a startled crowd as the jet took a nosedive and crashed near the airport’s runway, releasing fiery plumes of smoke.

No one else was harmed in the incident, according to an airport official, as the audience was gathered a considerable distance away from the crash site.