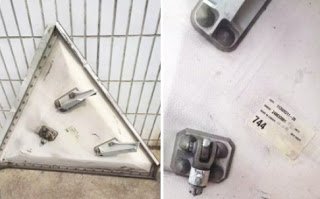 Boeing has ordered airlines around the world to address a “fragility” problem after a section of landing gear from one of its 777 passenger jets broke off shortly after take-off from Shanghai last week and plummeted 3,700 meters into a city suburb.

Flight AF111 had just left Shanghai’s Pudong airport for Paris when a sheet of metal weighing 60kg plunged down through a factory rooftop.

Air France has launched a fleet-wide inspection of 66 Boeing 777 jets delivered between 1998 and 2008, after the aircraft’s US manufacturer and the airline said the “fragility” of the metal attached to the plane’s landing gear known as the “drag strut door” was known to them.