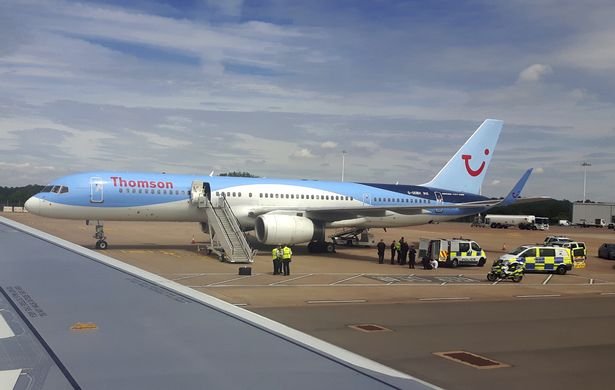 A Thomson flight to Spain was forced to make an emergency landing before it had even left the UK – to eject three rowdy passengers.

The Thomson flight from Glasgow to Alicante was forced to touch down at Bristol Airport amid concerns over the behaviour of three men.

A fleet of police vehicles swarmed onto the concourse to meet the plane and the trio were hauled off and arrested.

Images taken from an adjacent plane on the runway show the men sitting shame-faced on the floor as officers quizzed them.

The plane was delayed by 90 minutes at Bristol before bring allowed to continue its journey on Saturday morning.

Avon and Somerset Constabulary confirmed it attended the airport at 11.50am and arrested three men on suspicion of using threatening, abusive or insulting words towards airline crew.

Two of the men are aged 30 and 41 respectively but the age of the third is still unknown at this stage.

A spokesman for Bristol Airport said the incident may have begun as a medical emergency before becoming a matter that required police involvement.