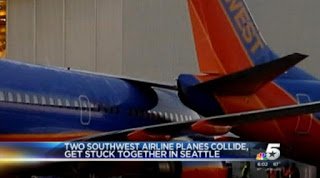 The planes were being prepared to be towed to the gates for flights when one aircraft rolled into the plane in front of it. The nose and fuselage of one plane struck the end of the wing of the second aircraft.

Nobody was hurt in the slow-moving crash, said Perry Cooper, airport spokesman.
The incident occurred in a cargo area where planes are parked overnight.

Emily Samuels, spokeswoman for Southwest Airlines, said in an email that “aircraft maintenance personnel are working to thoroughly examine both aircraft to determine any necessary repairs to be performed prior to returning the aircraft to scheduled service.”