BREAKING Russian Su-24 shot down by Turkey near Syria border 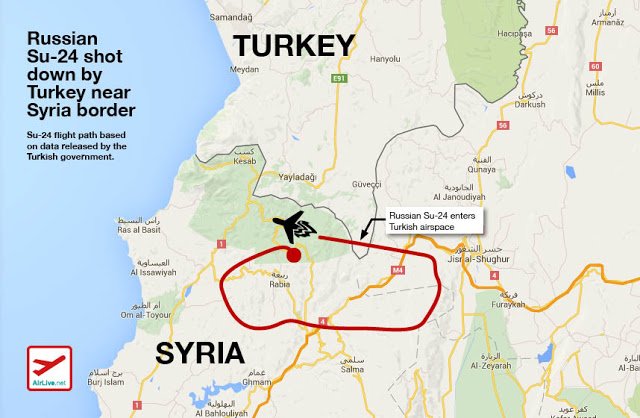 UPDATE Su-24 flight path based on data released by the Turkish government.

UPDATE We’re receiving video (we’ll not publish) of Russian pilot on the ground, confirming he is dead.

UPDATE One of the Russian pilots is reported killed by the Syrian opposition.

UPDATE The decision to shoot down Russian jet was taken “directly” by the Turkish Prime Minister.

UPDATE Russian Defense Ministry says it can prove the aircraft was over Syria for whole flight.

Turkey has shot down a military jet which it says violated its airspace near the Syrian border. Turkish TV reports described the plane as Russian, and video posted by the Haberturk TV station appeared to show the jet coming down in flames.