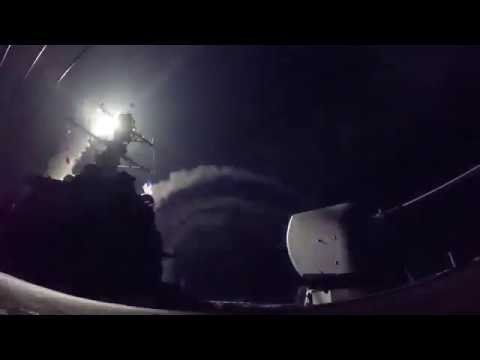 The US has carried out a missile strike against a Syrian air base in response to a suspected chemical weapons attack on a rebel-held town.

Fifty-nine Tomahawk cruise missiles were fired from two US Navy ships in the Mediterranean. President Donald Trump said they hit the Shayrat base that launched Tuesday’s attack.

It is the first direct US military action against Syria’s president.

The Kremlin, which backs Bashar al-Assad, has condemned the strike.

Dmitry Peskov, spokesman for Russian President Vladimir Putin, called it “an act of aggression against a sovereign nation”.

First look at the HAS damaged by the #US Tomahawk missile strike on the Shayrat Airbase, Homs #Syria today pic.twitter.com/TUd5LsE6ML