Kobe Bryant, the Los Angeles Lakers superstar who won five championships with the team and was often compared to Michael Jordan, died Sunday in a helicopter crash. He was 41.

UPDATE Bryant’s wife, Vanessa, was not among those aboard the chopper, but his 13-year-old daughter Gianna was, according to reports.

Officials confirm to Variety that Bryant was a passenger on board a helicopter that crashed in the L.A. Country suburb of Calabasas.

Bryant was allegedly traveling in his own private helicopter when it crashed. At least three other people were killed.

The helicopter was a Sikorsky S-76B, registration N72EX, it was owned by Island Express Holding Corp.

Investigators are trying to determine the cause of the fatal crash. 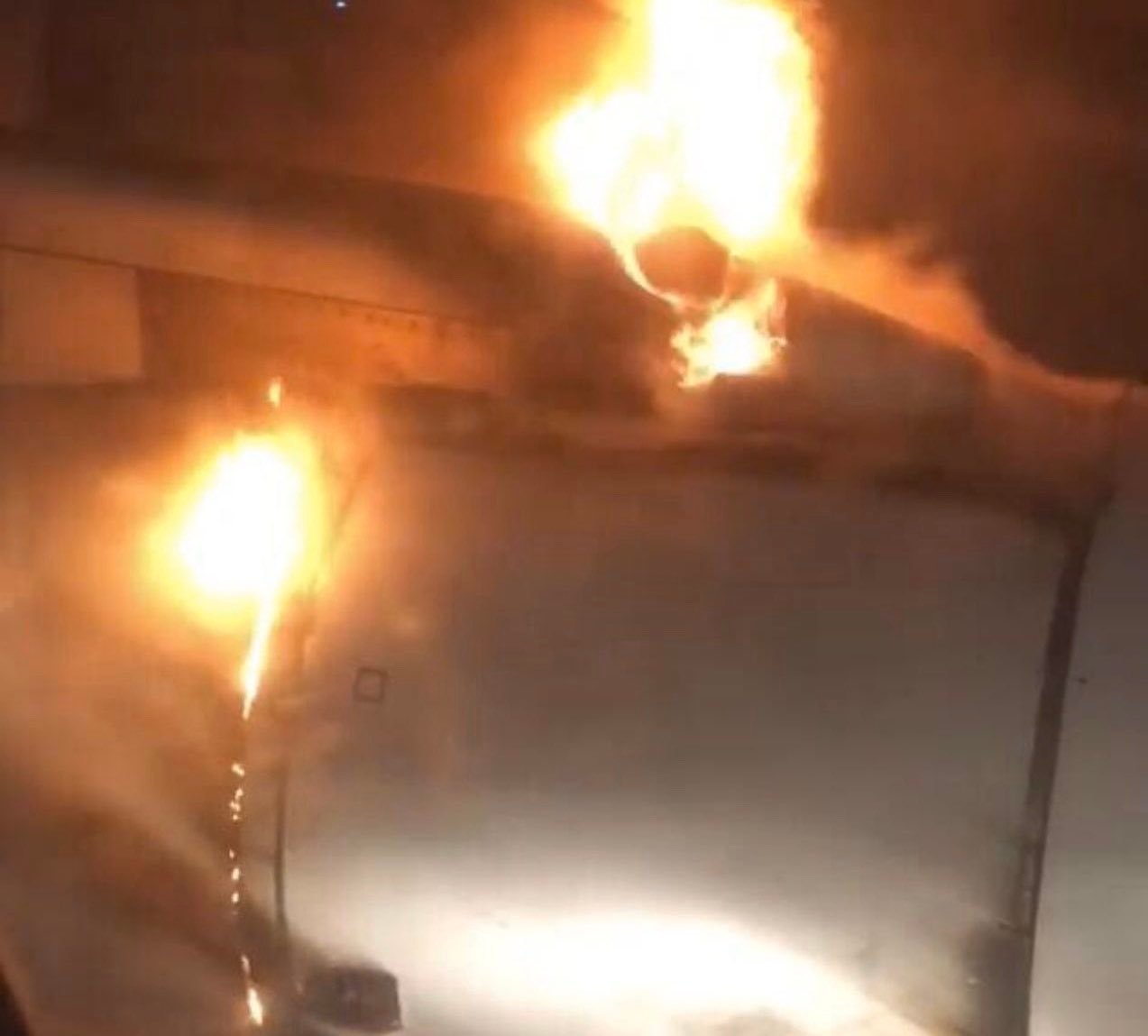 A Tehran-bound passenger plane was forced to return to Gorgan airport in northern Iran, as one of its engines caught fire shortly after takeoff.

The aircraft made an emergency landing and the passengers have been evacuated at the end of the runway.

The plane was carrying 85 passengers, none of whom were said to have been injured in the incident, according to local media.

The flight was reportedly operated by Qeshm Air. 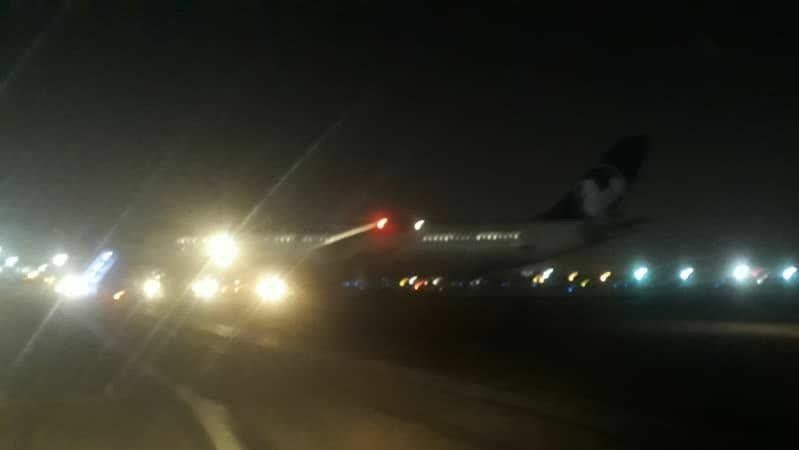 An Iran Air flight from Tehran to Istanbul that left Imam Khomeini International Airport was forced to land at Mehrabad airport due to a technical failure, Mehr news agency reported.

According to Iran’s Tasnim news agency, the Airbus A300-600 passenger airliner operated by Iran Airtour bound for Istanbul had to turn back and land at Tehran’s Mehrabad International Airport due to an unspecified technical issue. 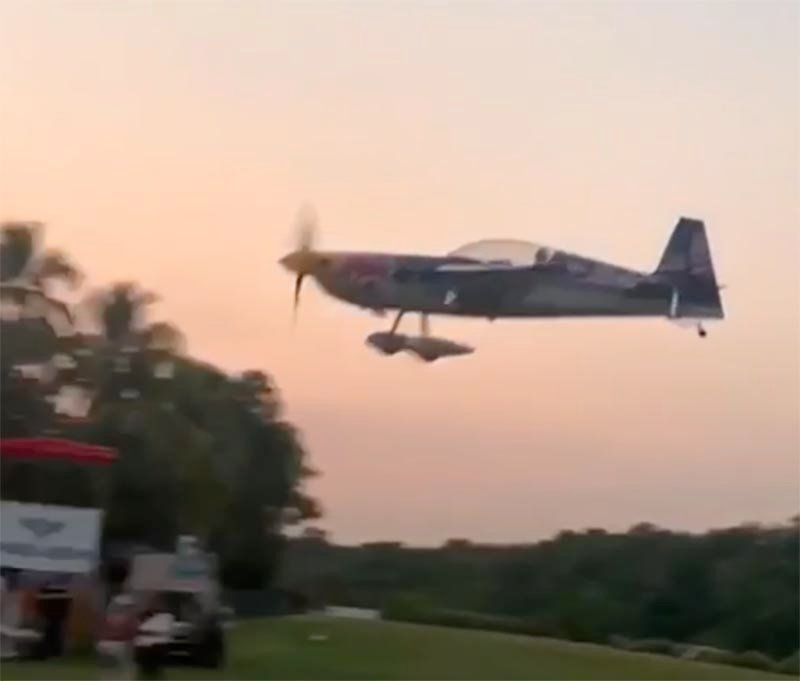 The plane has hit the ground in the southern department of Escuintla , in the municipality of Iztapa, about 110 kilometers south of Guatemala City, according to the Firefighters.

The pilot Steven Andelin and two US citizens on the ground have died.

The plane began to descend vertically. A few meters from the ground, the aircraft tried to straighten the course but finally crashed into the ground over several people watching the show. It rushed to a small water channel after crashing to the ground , according to the videos released.

The pilot performed a training flight for a private event scheduled for tomorrow by the Aeroclub of Guatemala, called “Show Iztapa LXV Anniversary”.

The plane was piloted by American Steve Andelin, who is part of the air team called Chambills, sponsored by Red Bull. 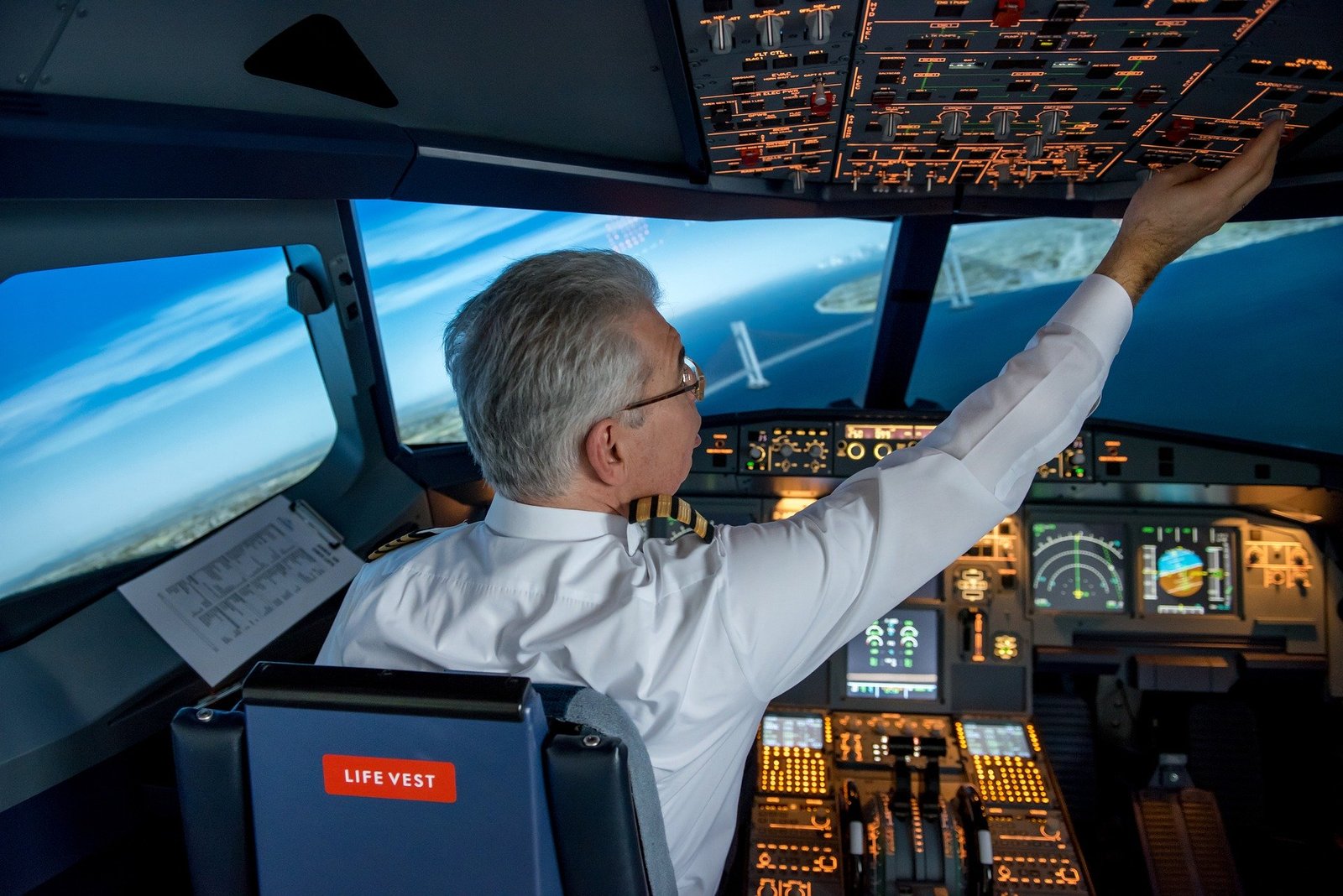 60% of 282 retired airline pilots included in a recent study died within five years of leaving their jobs, according to an international pilots organization.

Officials of the International Federation of Air Line Pilots Assns., which met in Washington, refused to speculate on the reasons for the large proportion of untimely deaths but said they have begun a worldwide study of the matter.

Mike M. Clarke, a pilot for British Airways and a vice president of the group, said he had based the initial study on pilot retirement records spanning the period 1953 to mid-1988.

Clarke said: “I told the pilots at the meeting (in Washington) that 60% of them would not be around when they were 65 years old.” The longevity figures for the pilots are markedly worse than for the rest of the population.

According to the National Center for Health Statistics, the overall average life expectancy for Americans 60 years old is 20.4 years. At 65 it is 14.7 years for men and 18.6 years for women.

Even though the original study–conducted by Clarke in Britain, Canada and Argentina–involved only the 282 pilots, the findings were surprising.

For one thing, Clarke said, pilots must undergo complete physical examinations before they begin work and subsequently must take physicals twice a year. Thus, if they have any illness, it is found much sooner than it is among the general public. Moreover, airline pilots retire at age 60 or earlier.

Though there has been continued controversy in the UK about the early retirement age for airline pilots, some other countries have even lower retirement ages. Retirement for pilots of British Airways, for example, is 55, and most other European airlines ground pilots at between 57 and 60.

The IFALPA study has been mailed to its member organizations, which will distribute and collect them from their members. When all of them have been returned and that is expected in June, they will be analyzed independently by the British Royal Air Force Institute of Aviation, which also helped write them.

The survey, which will be anonymous, asks 47 questions of pilots, including: 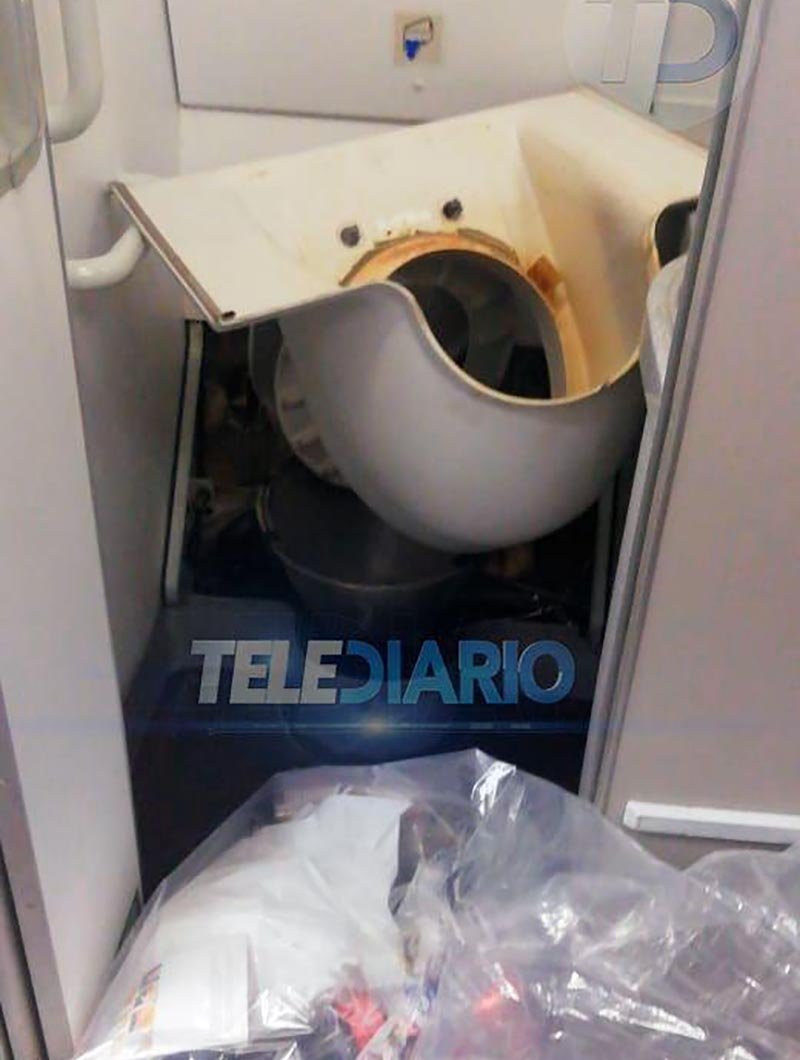 The Avianca flight #AV693 from San Jose, Bogota performed an emergency landing in Panama City this January 23 in the morning.

According to the airline, the aircraft encountered severe turbulences during its flight, which forced the crew to divert to Panama for an emergency landing at 4:41 am. 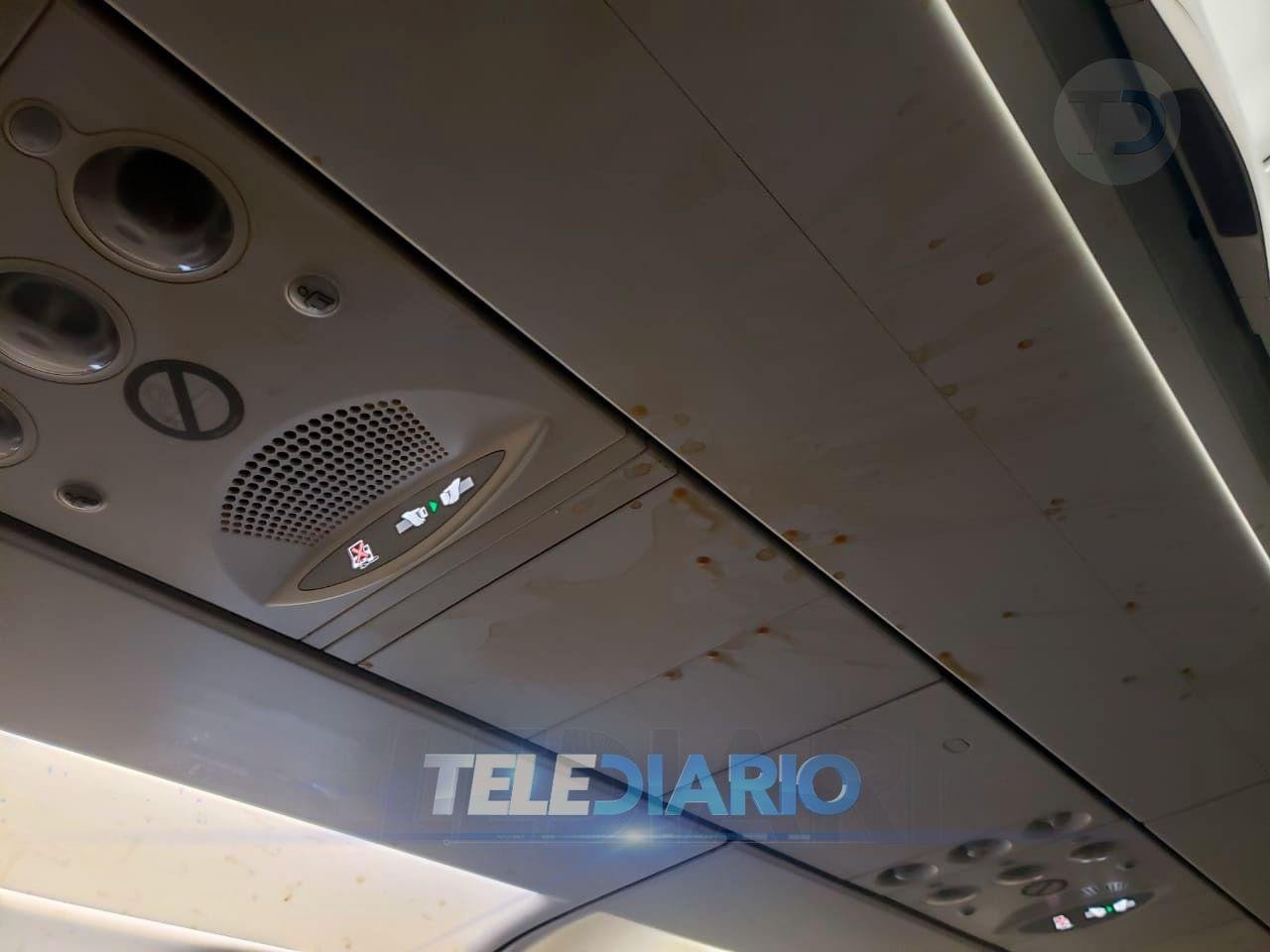 Upon arrival, the 108 passengers and 5 crew members underwent an initial medical check-up. One passenger and three crew members were sent to a hospital center for a detailed check-up. 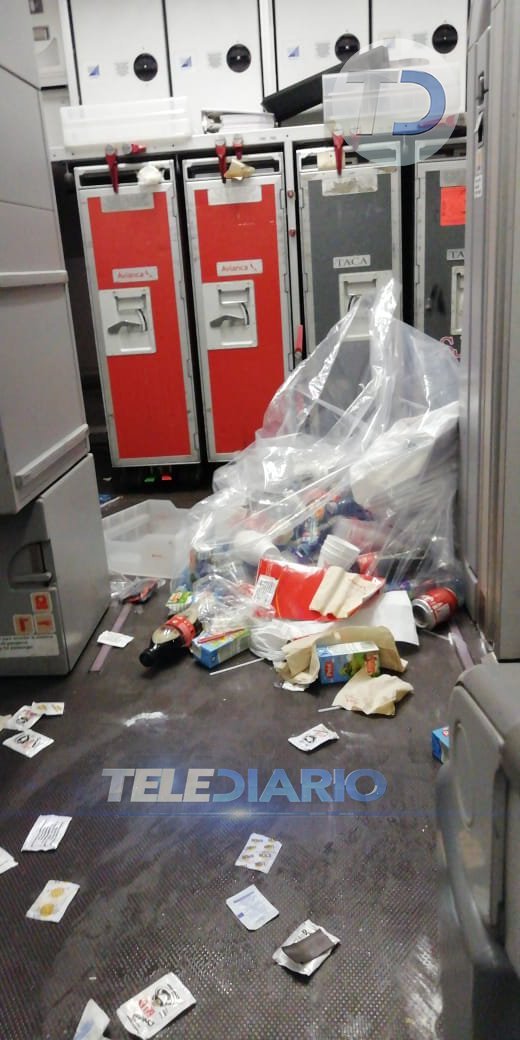 One of the passengers named Ronald Hanna told upon entering Colombian territory they experienced a turbulence that led the aircraft to plummet for two or three seconds. 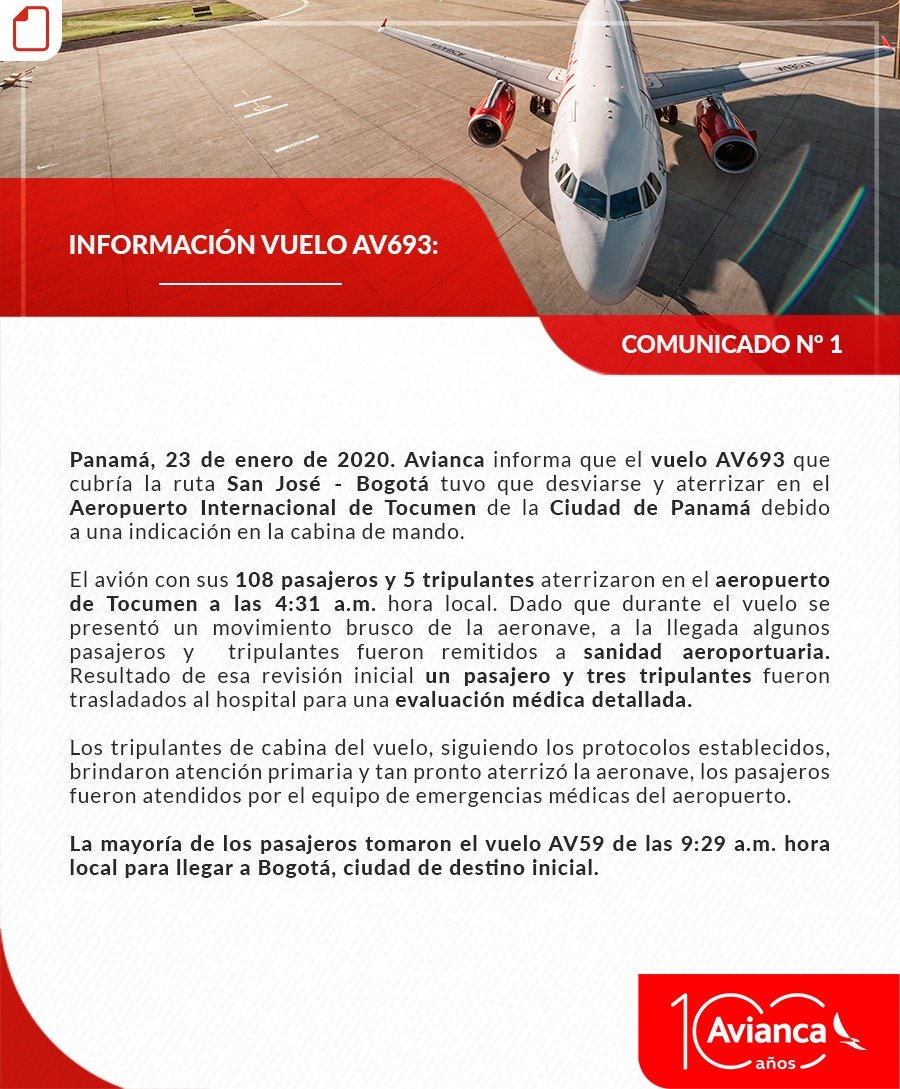 Proposals to invest in ailing Malaysia Airlines include one from Air France-KLM, which wants as much as 49%.

Air France-KLM said it had previously held talks with Malaysia Airlines’ owners but was not currently involved in the sale process.

Malaysia’s government has found the proposals from foreign airlines more attractive, but the sovereign wealth fund that owns Malaysia Airlines favors a deal with AirAsia, one of the sources said.

The Malaysian government has been seeking a strategic partner for its national airline, which has struggled to recover from two tragedies in 2014 – the mysterious disappearance of flight MH370 and the shooting down of flight MH17 over eastern Ukraine.

BREAKING Three firefighters from U.S. killed after a C-130 water tanker has crashed in the Snowy Monaro area, Australia 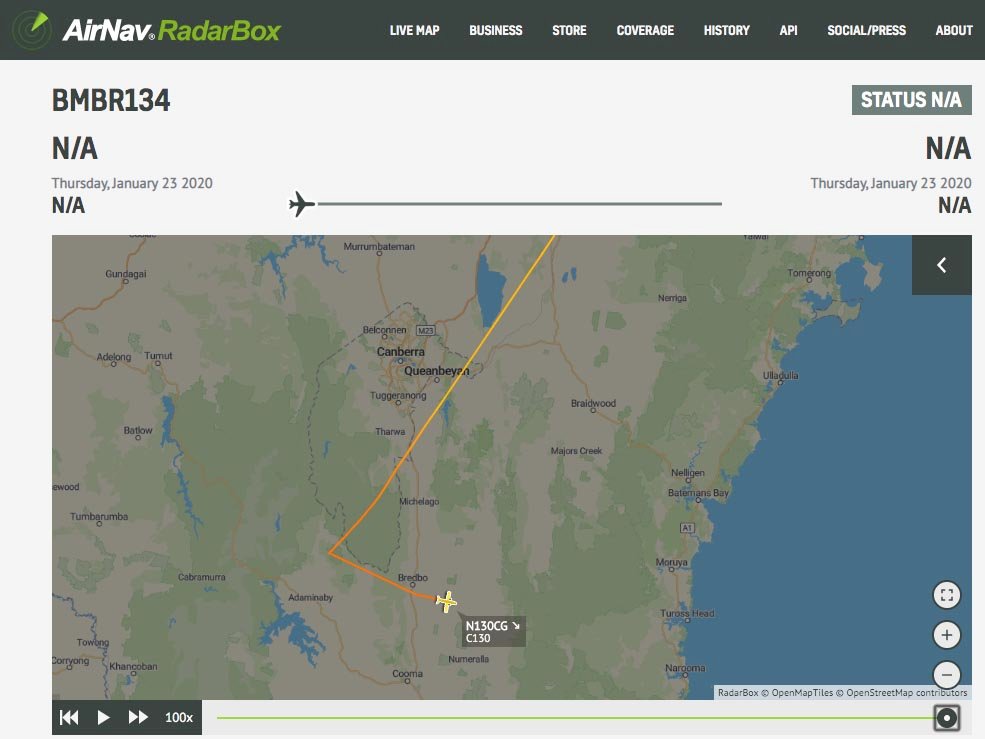 Three people have died after an RFS aerial water tanker crashed in the Snowy Monaro area on Thursday afternoon.

The wreckage was located by search crews and early reports suggest only the plane’s tail section is intact, while the remainder broke up on impact.

Crews say the crash site is surrounded by difficult terrain and “terrible visibility”.

The NSW Rural Fire Service said contact was lost with the C-130 Hercules in the Snowy Monaro area on Thursday afternoon.

Witnesses in the area say they saw a “ball of fire” as the aircraft reportedly hit the ground.

A number of aircraft were carrying out a search in Peak View, northeast of Cooma, including a P-8A Poseidon. 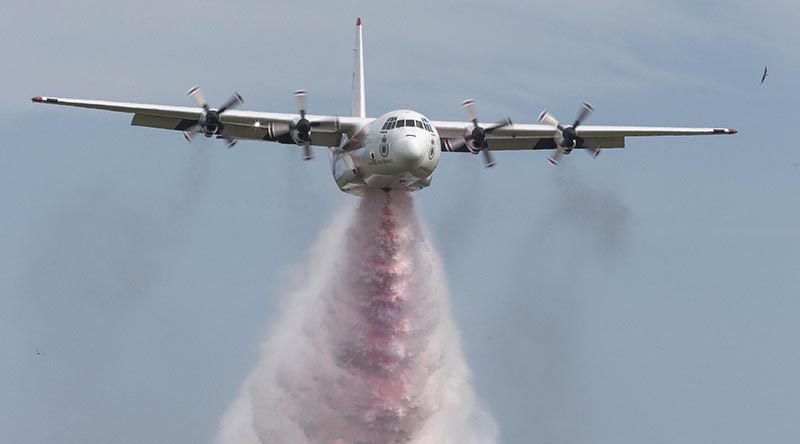 The C-130 Hercules Large Air Tanker is the largest aircraft in the RFS fleet with 15,000-litre capacity. it took off from RAAF Richmond.

Bad weather is affecting flights to and from Keflavik Airport.

Most flights are cancelled on Thursday morning due to extreme weather at Keflavik Airport.

Isavia, which operates Keflavík Airport, operates in accordance with rules on actions and responses when the weather conditions at Keflavík Airport are severe. These rules focus on ensuring the safety of passengers.

When weather conditions at Keflavík Airport are severe it may be necessary to limit the use of passenger boarding bridges (PBBs) to avoid injuries and, additionally, prevent damage to machinery and equipment.

If an aircraft lands under conditions preventing the use of PBBs, the aircraft must wait on the apron until the wind strength has fallen below reference limits. The handling of aircraft in a parking slot is the responsibility of the air carrier and the ground handling agent. 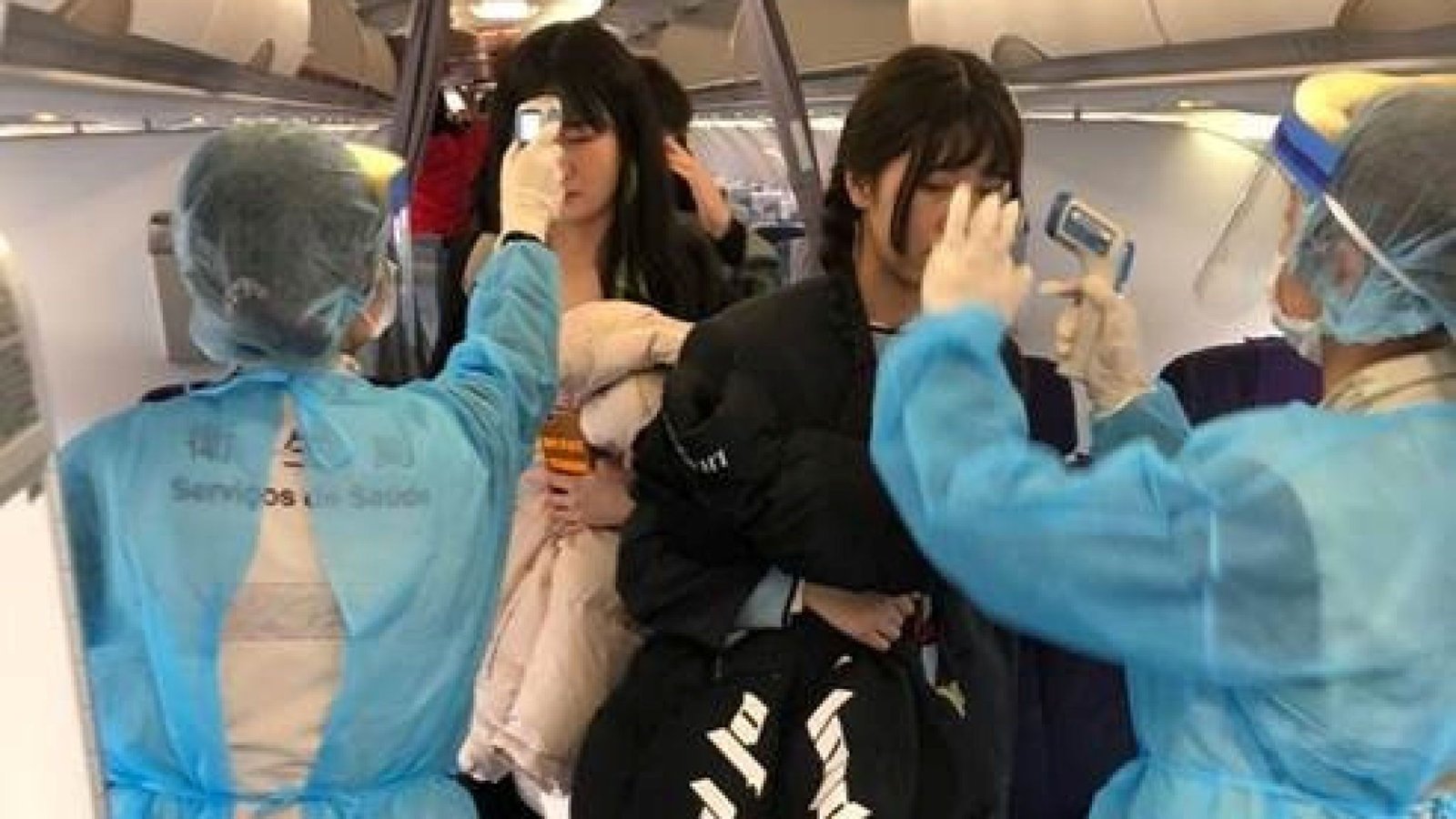 Wuhan airport and local transport networks will be suspended from 10am on Thursday.

Authorities are asking citizens not to leave unless there are special circumstances, said state media.

People arriving at Heathrow airport from the Chinese city at the centre of a coronavirus outbreak will be met by health teams including a doctor, the government has announced, as UK infectious disease experts doubled their estimate of the likely number of cases to 4,000.

Three direct flights a week arrive in the UK from Wuhan, where the outbreak began and which has been linked to a market selling seafood and wild animals.

The type of coronavirus has never been identified before and it has been confirmed that human-to-human transmission is taking place. About 460 people have become ill and nine have died so far in China.