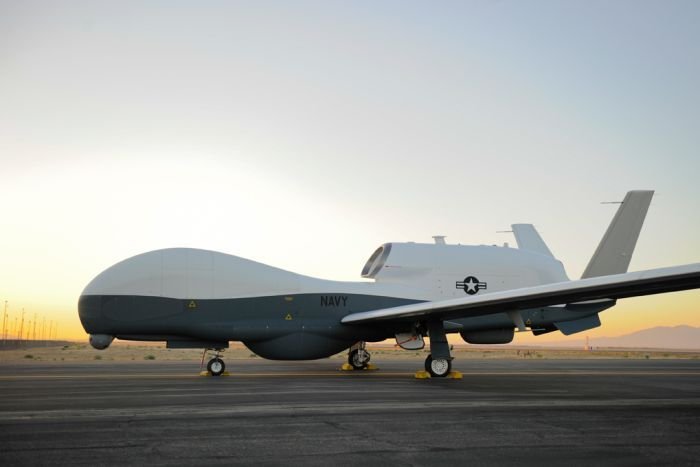 The Australian government has announced the purchase of 6 MQ-4C Triton maritime umanned aerial systems (MUAS) at the cost of $A7billion, from Northrop Grumman. The first Triton is expected to be delivered in 2023 with the full fleet due to be operation in late 2025.

The long-range MUAS will be capable of being airborne for more than 24 hours and will be based at Royal Australian Air Force (RAAF) Base Edinburgh, near Adelaide in the state of South Australia and work alongside Australia’s new Poseidon P-8 aircraft. They will also operate from RAAF Tindal in Australia’s Northern Territory. The UAVs will not carry weapons, but used for surveillance only, with the information gathered by them to be shared with the US, UK, Canada and New Zealand.

The Tritons will be used to detect foreign naval ships, illegal fishing and people smuggling. They will be capable of flying deep into the Pacific and Indian Oceans and reach as far south as Antarctica. ABC Australia states that Defence Industry Minister, Christopher Pyne, said the MUAS “would continue Australia’s capacity to monitor South-East Asia and the South China Sea.”

Australian Greens Senator Peter Whish-Wilson questioned the Defence Minister, Marise Payne, in Parliament about the increased cost of the MUAS. “Only two years ago in its White Paper the Government said that they would be acquiring seven drones at the cost of between $3 and $4 billion. But two years later, they’re acquiring six of these Triton drones, so one less, for $7 billion. That’s a more than a hundred per cent blowout in costs.”

Minister Payne replied by saying, “total cost of the six aircraft, and the associated systems and the infrastructure and estate works that need to be done, is estimated at about $3 billion, which is absolutely within the provision of the integrated investment program.” And that the $7 billion figure includes the whole of life sustainment costs. It also includes a $A200 million joint program with the US Navy for the development, production and maintenance of the MAUS.

Minister Payne has also announced a $A22 million upgrade of the Butterworth air base in Malaysia.

Each Triton has de-icing and lightning protection and has a wingspan slightly longer than a 737. They are capable of flying a maximum of 331 knots and have a ceiling of 50,000 feet.

An unmanned aircraft system with an autonomous capability built for maritime intelligence, surveillance and reconnaissance, Triton is the first Northrop Grumman-built aircraft system Australia has purchased. The system will be operated by the Royal Australian Air Force (RAAF).

“Northrop Grumman looks forward to bringing the Triton unmanned system with its autonomous capability to Australia,” said Ian Irving, chief executive officer, Northrop Grumman Australia. “Working with the Royal Australian Air Force and the U.S. Navy, we are confident that we can provide the best capability to fulfill Australia’s maritime mission.”

Triton can fly at altitudes of 55,000 feet for 24 hours at a time and is equipped with sensors that provide high-resolution imagery and near real-time video. Pilots and sensor operators fly the Triton from ground stations, which can command flights all over the world.

“Triton provides unprecedented endurance and 360-degree coverage through its unique sensor suite,” said Doug Shaffer, vice president of Triton programs, Northrop Grumman. “Australia has one of the largest sea zones in the world over which it has rights to use marine resources, also known as an Economic Exclusion Zone. As a flexible platform, Triton can serve in missions as varied as maritime domain awareness, target acquisition, fisheries protection, oil field monitoring and humanitarian relief.”

Triton builds on Northrop Grumman’s legacy of success in autonomous systems. The U.S. Navy recently acquired two operational Triton aircraft and is under contract for six more. These aircraft will go to Guam later this year and provide the Navy with an unprecedented common operating picture of the maritime environment. Triton can detect, classify and track ships over large swaths of ocean and littorals. The U.S. Navy program of record is for 68 aircraft.

Northrop Grumman has been building its presence Down Under for many years. The global aerospace and technology company will be the anchor tenant of an AUD $50 million Electronic Sustainment Centre of Excellence, to be established at the Badgerys Creek Airport precinct in western Sydney. The new centre will support advanced electronics such as communications and electronic warfare equipment, and targeting pods. Northrop Grumman will bring together highly skilled technicians, engineers and other professionals whose work will be further supported by the company’s high-end technology and software expertise.

Through a Global Supply Chain Deed signed with the Australian Department of Defence in 2011 and renewed in 2017, Northrop Grumman is identifying opportunities for Australian industry to be part of the company’s global supply chain. For example, Northrop Grumman’s largest Australian F-35 Lightning II joint strike fighter supplier, Quickstep Technologies, demonstrated that its new production facility is equipped and qualified to manufacture and deliver quality composite parts for the F-35’s centre fuselage. At a new facility opened in Bankstown, Sydney, in 2012, Quickstep is expected to manufacture over 36,000 parts for the F-35.

“Australia and the United States are celebrating 100 Years of Mateship this year, marking an alliance that goes back to the trenches of WWI. Northrop Grumman is proud to partner with such a loyal friend and provide this unprecedented capability to the RAAF,” said Irving. “We consider Triton and its autonomous technology to be the future of the next centennial of aviation, and we are honored to be part of this century-long partnership.”

“The security of Australia’s maritime borders will be significantly strengthened with another major military investment.

The Turnbull Government will invest $1.4 billion and acquire the first of six MQ-4C Triton remotely piloted aircraft through a cooperative program with the United States Navy.

The Triton will complement the surveillance role of the P-8A Poseidon aircraft through sustained operations at long ranges as well as being able to undertake a range of intelligence, surveillance and reconnaissance tasks.

Together these aircraft will significantly enhance our anti-submarine warfare and maritime strike capability, as well as our search and rescue capability.

Our number one priority is keeping Australians safe. This investment will protect our borders and make our region more secure.

As part of this investment Australia will also enter into a $200 million cooperative program with the United States Navy for the development, production and sustainment of the MQ-4C Triton.

Australia’s alliance with the US is our most important defence relationship, underpinned by strong cooperation in defence industry and capability development.

This cooperative program will strengthen our ability to to develop advanced capability and conduct joint military operations.

As part of the initial $1.4 billion investment in the Triton system, the Government will invest $364 million on new facilities at RAAF Base Edinburgh and RAAF Base Tindal, as well the necessary ground control systems, support and training required to implement a project of this nature.

The project is expected to create about 70 jobs across South Australia and the Northern Territory.

Northrop Grumman as supplier of the Triton will play a lead role in delivering the capability in Australia. This investment follows Northrop’s commitment to a $50 million advanced Electronic Sustainment Centre of Excellence at the new Western Sydney Airport.

Australia has already taken delivery of seven Poseidon aircraft and achieved Initial Operational Capability earlier this year. The full fleet of 12 Poseidon aircraft is expected to be delivered and in operation by 2022.

The first of the Triton aircraft is expected to be introduced into service in mid-2023 with all six aircraft planned to be delivered and in operation by late 2025, based at RAAF Base, Edinburgh in South Australia.

The Orion fleet has performed exceptionally on operations throughout its distinguished service, and the last of these aircraft will be over 40 years old when they are withdrawn from service in 2023.”