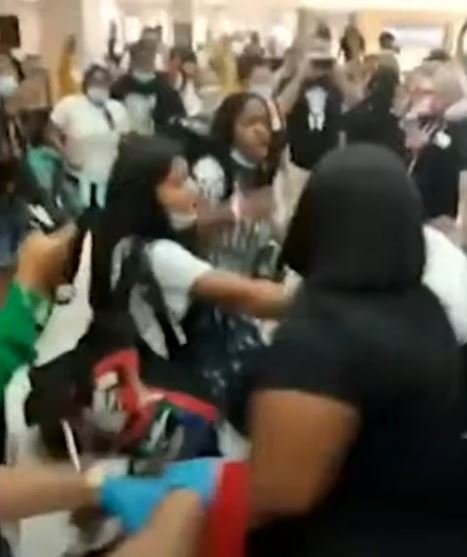 Dramatic video captured a melee that erupted at Puerto Rico’s international airport in San Juan after a drunken woman refused to get off a Philadelphia-bound plane, according to a report.

The chaotic incident took place Monday at the Luis Muñoz Marín International Airport, where the woman refused to disembark at the crew’s request, according to Storyful.

Meanwhile, another passenger became ill around the same time – setting the stage for the ensuing bedlam after the captain canceled the flight by invoking a coronavirus policy that allows such action for an illness, an airport rep said.

Footage shared by passenger Jorge Luis Vargas captures the pilot’s poorly received announcement. In a second video, a crowd of people is seen assaulting a woman inside the terminal.

Local media identified Blawer Diskson More, 33, of Philadelphia, as a passenger who allegedly became upset on the flight. It was unclear if she was the one who was intoxicated.

A second passenger, identified as Spencer Crone, 32, also of Philly, was allegedly assaulted while trying to defend the victim.

Both refused medical attention, local reports said. Police were called and made arrests.