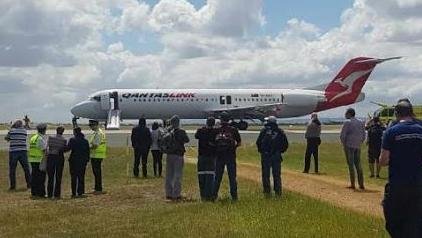 A Qantas flight has been forced to make an emergency landing in Perth today after after fumes were noticed in the cabin.

Qantas flight QF1623 operated by a Fokker 100 was headed from Newman to Perth. It was only moments before touchdown the crew noticed the smell and fumes.

According to Perth Airport officials, the pilots reported a hydraulic problem on descent into Perth.

Perth Airport confirms that Qantas QF1623, an F100 aircraft with 102 passengers on board, has landed safely.

The aircraft with 97 passengers and 5 crew onboard landed safely at 11:48am and it wasn’t long before an evacuation was carried out.

In a statement, Qantas said no emergency landing was requested by the pilots.

“A QantasLink/Network Aviation F100 landed safely at Perth Airport this morning at 11:36am.

All passengers and crew are safe and accounted for.

No emergency landing was requested by the pilots however emergency services are in attendance as a normal precaution.

There were 97 passengers and five crew onboard.

The aircraft was operating QF 1623 from Newman to Perth.

We will provide more information.”