BREAKING A vintage aircraft has crashed at the Burnet Municipal Airport, USA with thirteen people onboard (video) 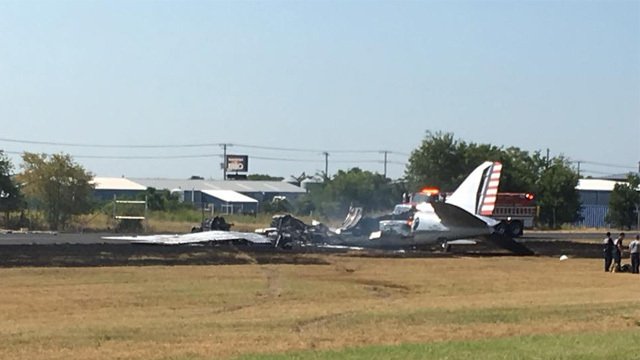 WARNING: ***GRAPHIC LANGUAGE*** An aircraft crashed at the Burnet Municipal Airport this morning, according to the Burnet County Sheriff's Office. Thirteen people were onboard at the time of the crash. Eight were injured. https://bit.ly/2uFukGh Video: Matt Gallager

The crash happened on a runway at the airport shortly after 9 a.m. on Saturday, July 21. The C-47 “Bluebonnet Belle” was reportedly trying to take off when the crash happened, according to the Burnet County Sheriff’s Office.

Thirteen people were onboard at the time of the crash. Eight were injured. One person was airlifted by a helicopter to South Austin Medical Center with burn injuries. Seven people were ground transported to Seton Highland Lakes with minor injuries.

The aircraft did catch fire as well as nearby grass, according to BCSO. The fires were extinguished by responding fire departments. The Texas Department of Public Safety and the Federal Aviation Administration are taking over and will be conducting an investigation into what led to the accident.

The C-47 “Bluebonnet Belle” is an antique aircraft owned by the Highland Lakes Squadron. The working museum, which is dedicated to preserving vintage WWII aircraft, is a branch of the Commemorative Air Force and is located at the airport in Burnet.