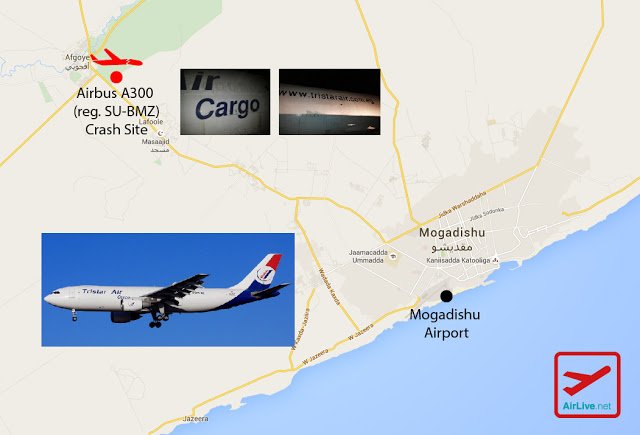 A plane has crash-landed 25 km west of Mogadishu after several failed attempts to land at the Aden Abdulle International Airport this evening, senior police commissioner has said.
The plane, an Airbus A300F which is said to have been carrying cargo for the African Union troops AMISOM took a turn from the airport after suspected landing gear problem before the pilot took it down at Arbiska in the outskirts of Mogadishu.
(Other sources tell Aden Adde International Airport had no runway lights switched on and the Airbus was short of fuel.)

The occupants of the plane are safe except for one who was injured and rushed to hospital. All crew members were Egyptians.

AMISOM has dispatched a helicopter to air left the crew to Mogadish and the security of plane is now under the full control of Somali National forces and AMISOM troops.

#Pictures taken from cargo plane which has crash landed in the outskirts of #Mogadishu, carrying frozen food for AU pic.twitter.com/N7SbzeIQ1j