BREAKING An Australian exploration company believes it may havefound #MH370

An Adelaide-based exploration company believes it may have located the wreckage of Malaysia Airlines flight MH370, 5000km away from where authorities have been looking.
The company, GeoResonance, says its research has identified elements on the ocean floor consistent with material from a plane.
Six weeks have now passed since the plane disappeared and extensive searches in the Indian Ocean have failed to locate any wreckage.
It started its own search for the missing aircraft on March 10.
“The technology that we use was originally designed to find nuclear warheads, submarines… our team in the Ukraine decided we should try and help,” David Pope from GeoResonance said.
The company surveyed over 2,000,000 square kilometres of the possible crash zone, using images obtained from satellites and aircraft.
Scientists focused their efforts north of the flight’s last known location, using over 20 technologies to analyse the data including a nuclear reactor.
They could not believe what they found in the Bay of Bengal.
“Our team was very excited when we found what we believe to be the wreckage of a commercial airliner,” Mr Pope said.
Pavel Kursa from GeoResonance told 7News: “We identified chemical elements and materials that make up a Boeing 777… these are aluminium, titanium, copper, steel alloys and other materials.”
An initial report was sent to authorities while the black box still had two weeks of battery power.
The team then verified its findings by analysing images from the same area on March 5, three days before the plane disappeared.
“The wreckage wasn’t there prior to the disappearance of MH370,” Mr Pope said.
The full report was delivered on April 15.
“We’re not trying to say that it definitely is MH370, however it is a lead we feel should be followed up,” Mr Pope told. 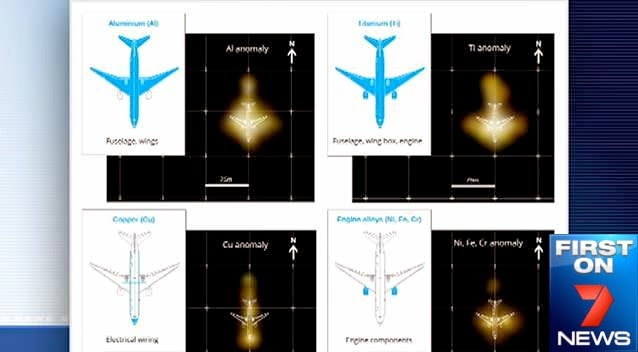