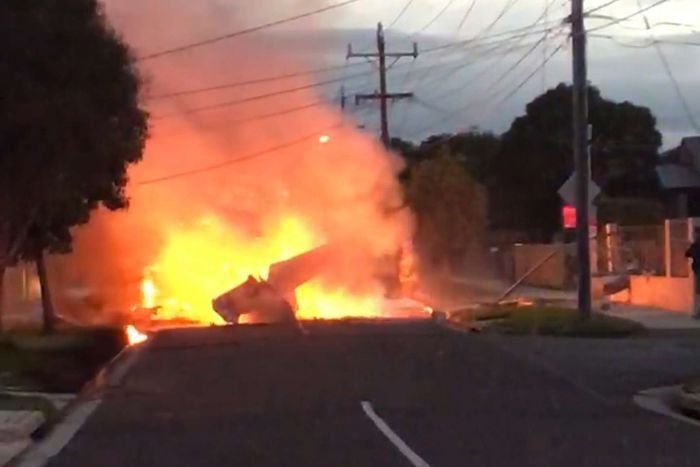 A small plane has crashed into a residential street in south-east Melbourne.

Local media are reporting the plane hit powerlines and possibly clipped a house. The scene of the incident is less than 400 metres (0.25 mi) from the Moorabbin Airport

One witness told radio station 3AW, “The plane is in the middle of the road, it went through the fence of one of the residences… It crashed into the house. I think it did a crash landing, not a controlled landing. There are a lot of people, police cars, ambulances, there’s a lot going on.

Resident of Scarlett Street, Grant, told ABC Radio, “The aircraft is on the street, its badly burnt in the fuselage behind the engine and the cockpit. I heard the thump and didn’t pay much attention, thinking it was just a car accident down the road somewhere and then the whole neighbourhood went nuts with non-stop fire brigades, ambulances, police. You can’t move out on Scarlett St for emergency vehicles at the moment. A neighbour was walking his child down there and scooted out of the way real quick and it was just a ball of flame all the centre of it.”

The Australian Transport Safety Bureau will investigate the incident.

The pilot is yet to be identified.

MFB crews are on scene at this tragic incident. The crash sparked a fire in a residential street which firefighters have extinguished. https://t.co/FRMXbx16wt

The ATSB will be investigating the fatal collision with terrain of a single-engine Cessna 172 aircraft, which occurred at #Mordialloc, in Melbourne’s south-east, on Friday afternoon.