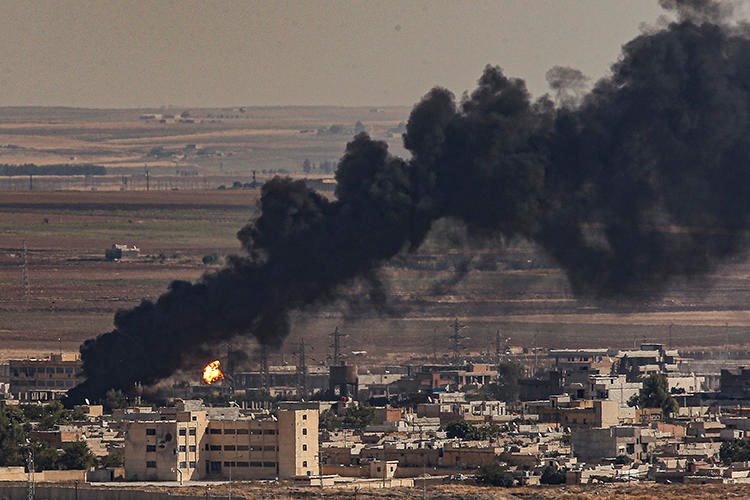 In this photo taken from the Turkish side of the border between Turkey and Syria, in Ceylanpinar, Sanliurfa province, southeastern Turkey, smoke billows from fires on targets in Ras al-Ayn, Syria, caused by bombardment by Turkish forces, Sunday, Oct. 13, 2019. Turkey’s President Recep Tayyip Erdogan has rejected offers for mediation with Syrian Kurdish fighters as the Turkish military continues its offensive against them in northern Syria. (AP Photo/Emrah Gurel)

At least 11 people were killed and 74 injured in a Turkish airstrike on a convoy in northern Syria, Kurdish media reported Sunday.

France 24 broadcaster said at least one of their journalists was also among the dead, while two French reporters were reportedly injured in the attack. “Our team is fine but some colleagues are dead”, Stephanie Perez, a French journalist, tweeted earlier.

The attack hit a convoy outside the border town of Ras al-Ain which Turkish forces had seized earlier in the day, according to the Kurdish-led Syrian Democratic Forces (SDF).

Earlier reports suggested that at least 9 people had been killed, but the Kurdish-led military, cited by local media, put the death toll at 11. It remains unclear how many killed civilians are dead.