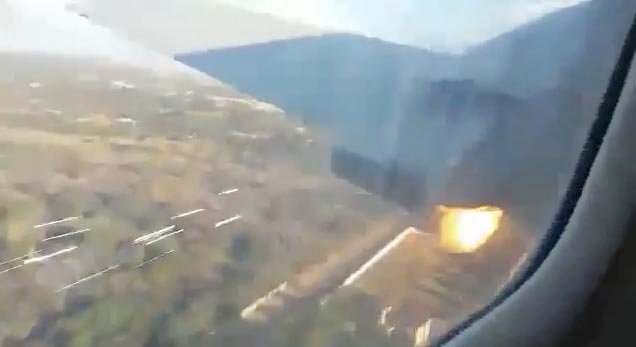 Dramatic footage filmed by a passenger shows how flames spewed from the engine of Convair CV-340 aircraft which shook violently moments before crashing at Wonderboom near Pretoria.

Two people died and two pilots were critically injured when the Convair 340 (first flew in 1954) ferried passengers on luxury air safaris and crashed on July 10.

The three-minute clip shows the terrifying final moments of the aircraft’s descent. “It’s getting bad. This is getting very bad,” one of the passengers can be heard saying. “Why are we shaking like this,” asks another.

The iPhone video was filmed by a passenger sitting by the left wing.

As the aircraft swoops low over trees and a man says, “They’ve got to cut the engine so we can reach the runway.”

The final words, moments before impact, a man says (translated from Afrikaans), “Geez, this is going to be bad.” The impact sounds like an explosion and the screen goes black. In the darkness people call out to each other before scrambling to exit the aircraft.

Qantas pilots Douglas Haywood and Ross Kelly were among 19 people, including three Dutch and 14 South Africans, aboard the Convair which left Wonderboom Airport in Pretoria for a scenic flight.