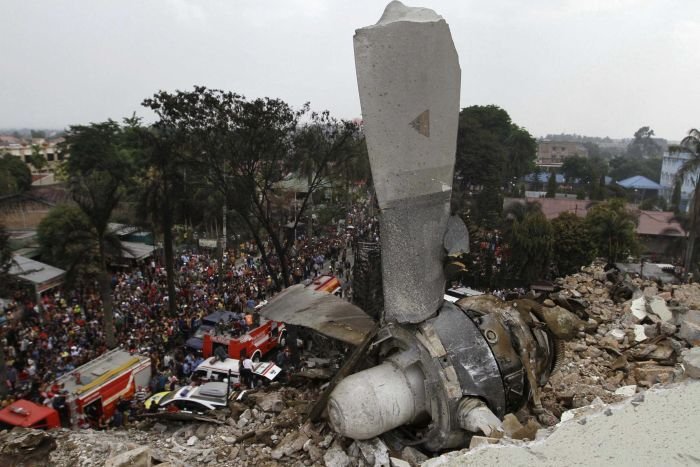 
The death toll from the crash of an air force transport plane in the Indonesian city of Medan jumped to more than 140 on Wednesday, indicating a growing list of victims from the neighborhood where the plane went down.

North Sumatra police major A. Tarigan told TVOne that 141 bodies have been recovered from the rubble of a residential area where the C-130 Hercules crashed shortly after takeoff on Tuesday.

The air force says there were 122 people on the plane including military personnel and their families.

Witnesses said it was shooting flames and smoke before crashing. Air force chief Air Marshal Agus Supriatna has said the pilot told the control tower that he needed to turn back because of engine trouble and the plane crashed while turning right to return to the airport.

The air force repeatedly raised its figures for the number of the people on the plane, indicating lax controls and raising questions about whether it was accepting paying passengers despite previous promises to crack down on the promise. Hitching rides on military planes to reach remote destinations is common in Indonesia, a sprawling archipelago that spans three time zones.

The plane’s manifest listed 50 people on the doomed flight from Medan to the remote Natuna island chain, according to North Sumatra police chief Eko Hadi Sutedjo, but the actual number was more than double that. The plane had traveled from the capital, Jakarta, and stopped at two locations before arriving at Medan.

Indonesian lawmaker Tubagus Hasanuddin said there could be a number of civilian passengers who had paid to board the Hercules C-130 aircraft.

Mr Hasanuddin said investigations will be done to determine if there were payments made to fly with the ill-fated plane built in 1964.

“I received information that there were passengers who paid up to 900,000 rupiah (US$69), but I’m still checking if this is true. Even if you take a civilian flight, it’s not so expensive,” said Mr Hasanuddin.

The politician from the Indonesia Democratic Party of Struggle (PDIP) said the Hercules aircraft is meant only to transport military personnel or logistics for military operations.

Other than that, the Hercules can be used as a transport aircraft during disaster and emergency, transport for regional offices, or to transport the families of soldiers who are on duty.

“The procedure allows for the transportation of logistics when there is a disaster, the families of soldiers who are on duty in the region, or regional governments to facilitate their work,” he said.

Mr Hasanuddin added before the aircraft departs for an operation, there must be a passenger manifest produced by the Commander of the Airbase.

“Those who board the aircraft must be registered in the manifest as permitted by the Airbase Commander,” he concluded.

There have been a number of families who admitted that they paid to fly on board the military aircraft.

Witnesses said they paid up to million rupiah (US$76) per person to get on board the plane. “My cousin paid 1 million rupiah,” said Hendra Bakkara, a relative of the victim.M

Indonesia has a patchy civil aviation safety record and its cash-strapped air force has also suffered a series of accidents. Between 2007 and 2009, the European Union barred Indonesian airlines from flying to Europe because of safety concerns.


At least 116 people are feared dead after an Indonesian air force transport plane crashed Tuesday into a major city shortly after take-off and exploded in a fireball.

Air force chief Agus Supriatna said the manifest showed there were 113 people on board the plane – 12 crew and 101 passengers – when it crashed, and he did not believe any had survived.

Al-Jazeera correspondent Stephanie Dekker tweeted that the pilots had asked to return to base after take-off as something was wrong with the plane. After the plane turned around, it crashed, Dekker said.

Many passengers were likely to be family members of servicemen and women, said a spokesman for Medan airbase, where the plane took off.

At least one child has so far been confirmed killed.

The local search and rescue agency also said that three people were killed on the ground when the 51-year-old plane went down near a newly built residential area, hitting a massage parlour and a small hotel.

A rescue operation swung into action, with ambulances ferrying bodies from the site, and crowds of anxious residents gathering around a police cordon to view the smouldering wreckage.

Residents of Medan described the terrifying moment just after midday when the plane came down. “It was very scary,” said Novi, an employee of an international school who goes by one name, describing how she heard the plane and saw it flying very low before the crash.

Another local resident Januar, 26, said the aircraft appeared to be in trouble just before the accident. “I saw the plane from the direction of the airport and it was tilting already, then I saw smoke billowing.”

Medan’s police chief described the bodies as “crushed by debris of the buildings and the fuselage”.

Indonesian President Joko Widodo expressed sorrow at the accident, tweeting: “May the families be given patience and strength… May we remain protected from disaster.

The plane crashed into houses and buildings, including a hotel, located near the Soewondo Air Force Base, where the plane took off. Officials with Adam Malik Hospital told the news site detik.com that the hospital has received 36 bodies, with three victims saved.

None of the bodies have been identified and it’s unclear how many of the victims are military personnel and how many are civilians, North Sumatra police chief Eko Hadi Sutedjo said. The plane was carrying 50 people based on its manifest, he said.


At least 30 people were killed when an Indonesian military transport plane crashed into the city of Medan on Sumatra island and exploded in a ball of flames.

An Indonesian military transport plane crashed on Tuesday shortly after take-off in the city of Medan on Sumatra island, exploding in a ball of flames and damaging nearby buildings.

The C130 Hercules crashed into two houses and a car, local media said.

“We don’t know yet the number of people on board or how many casualties have been caused,” military spokesman Fuad Basya said.

There was no immediate information on the number of people on board or any casualties on the ground after the plane went down. Metro TV reported there may have been 13 people on board.

Dramatic pictures on social media showed large crowds and emergency services gathering around the flaming wreckage, with the fuselage of the aircraft visible among thick plumes of black smoke. Buildings in the vicinity of the crash zone were also clearly damaged.

Eyewitnesses said the plane was seen circling the air space at low altitude before it crashed.

Air force operations commander Agus Dwi Putranto said on local television there were 12 crew members on the plane. The total number of passengers on board was unknown.

“A Hercules was… transporting military logistics from Medan,” military spokesman Fuad Basya told AFP. The plane took off at 12.08 pm from an air force base and crashed in the city about two minutes later about five kilometres from the base, he said.

Asked about potential casualties, Mr Fuad said: “We don’t know for sure but inside there will be the plane crew, pilot, but I don’t know how many.”

“The latest information we have is that 30 have died…. The number could go up,” Mr Hisar Turnip, a spokesman for Indonesia’s search and rescue agency, told Reuters.

A doctor at a Medan hospital, told Reuters only patients with light injuries had so far been received, with Adam Malik hospital spokeswoman Sairi M. Saragih later saying the hospital had received five bodies so far.

The plane was on its way from an air force base in Medan to the remote Natuna islands and crashed a few minutes after takeoff, Mr Fuad said. Media said the pilot had asked to return because of technical problems.

Mardiaz Dwihananto, police chief of Medan city where the accident happened, told AFP that five to six bodies had so far been recovered from wreckage of the plane and buildings after the crash in a residential area. “The bodies were in (the) debris of the plane and buildings… we are taking the bodies one by one by ambulance to Adam Malik hospital. We haven’t managed to evacuate all of the bodies.”

“It passed overhead a few times, really low. There was fire and black smoke. The third time it came by it crashed into the roof of the hotel and exploded straight away,” Elfrida Efi, a receptionist at the Golden Eleven Hotel, told Reuters.

She added that the plane also hit a massage parlor, where there are usually a few people during the day.

The Lockheed C-130 Hercules is a four-engine military aircraft that can use even rudimentary runways for takeoffs and landings. It is currently the principal tactical airlifter for a lot over 60 nations worldwide, and there are 40 different models of the heavy-duty plane currently in service.

It is the second time in 10 years that an air plane has crashed into a Medan neighborhood. In September 2005, a Mandala Airlines Boeing 737 crashed shortly after takeoff from Medan’s Polonia airport, into a crowded residential community, killing 143 people including 30 on the ground.

Medan, with about 3.4 million people, is the third most populous city in Indonesia after the capital Jakarta and Surabaya.