BREAKING A twin-prop Metroliner crashed in Luqa (Malta) this morning 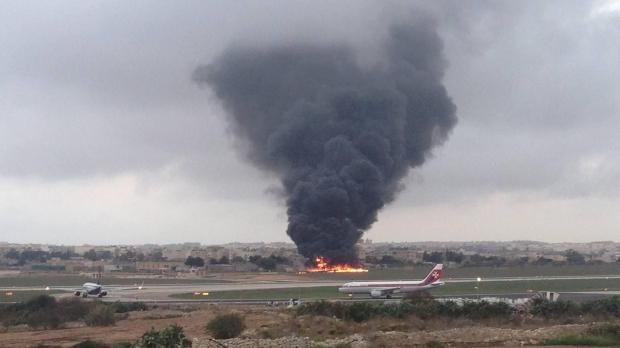 Five people died this morning after the aircraft they were flying in crashed shortly after take-off in Luqa at around 7.20am (local) killing 5 people including 3 French intelligence agents.

Sources said the plane crashed near the runway soon after take-off and subsequently burst into flames. An eyewitness told Times of Malta they saw the plane take-off and rise before it suddenly tipped onto its right side “and went straight down into the ground.”

Mater Dei hospital staff have been placed in major incident mode. Emergency services are on site and flights to and from Malta International Airport have been halted. In a statement, MIA said that the aerodrome will remain closed until further notice. It apologised to passengers for the inconvenience.

The twin-prop Metroliner plane was leased from Luxembourg for use by Frontex officials, sources said, with indications that it was heading for Misurata in Libya. Frontex is the EU’s border management agency.

Some of the burning wreckage ended up on the airport perimeter road between Kirkop and Safi, and firefighters are on the scene spraying the area with foam.

Statement from Government of Malta:

A Fairchild Metroliner Mark III aircraft registered in the United States and leased to a Luxembourg company crashed soon after take-off from Malta International Airport at around 0720 CET.

Official information, footage and eyewitnesses, including three members of the Armed Forces of Malta at the nearby Safi Barracks, and two commercial airline pilots, clearly indicate that there was no explosion prior to impact. Several inquiries, as established by international rules and the Laws of Malta, are currently underway to establish all facts.

The remains of all five men on board, all French nationals, have been found.

The flight was part of a French Customs surveillance operation which has been taking place for the past five months, with the aim of tracing routes of illicit trafficking of all sorts, including human and drug trafficking amongst others. The said flight was registered with the Malta Air Traffic Services as a local flight and was to return to Malta within hours without landing in third countries.