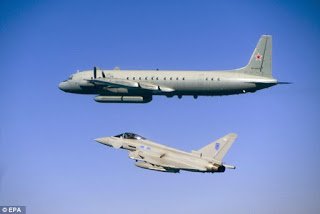 RAF Typhoon jets were scrambled to intercept two unknown Russian aircraft including a spy plane on a mission over the Baltic Sea.

The jets were initially deployed from Amari air base in Estonia on Monday following reports of an aircraft approaching Baltic airspace without sharing a flight plan.

It was identified as a Il-20M Coot A surveillance aircraft, which the Typhoons shadowed.