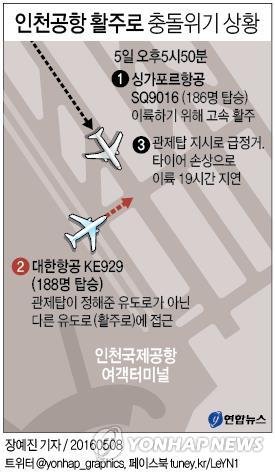 Friday, Singapore Airlines flight SQ16 to San Francisco was forced to make an emergency stop during takeoff when the controller told the pilots that Korean Air flight KE929 (Airbus A330-200) to St Petersburg (Russia) was crossing the runway without permission.

Bounded for San Francisco, SQ16 flight, which was carrying 186 people on board, was running at 90-100 km/h as it accelerated so that it could lift off the ground at about 5.50pm.
Several tires of the Singapore Airlines Boeing 777-300ER exploded during braking. Both planes had come to a halt, they were 1.7km apart.

Ministry of Transportation launched an investigation to understand what could have been a terrible disaster and to determine the exact circumstances and the responsibility of everyone.