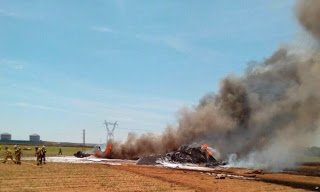 During the maiden flight of the A400M designed to join Turkish Air Force on Saturday, the pilot declared emergency shortly after takeoff from the airport in Seville, about 500 meters above sea level then decided an immediate Return.
The plane then crashed into a utility pole. Four of the six Spanish crew members were killed, two others were seriously injured.

Apparently there had been a sudden interruption in the fuel supply, according to industry sources. It may not be a mechanical damage to the engine itself accordingly.