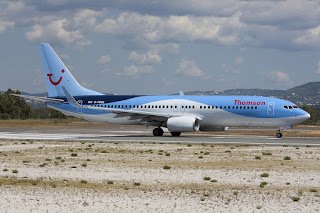 According to the Daily Mail, on August 23, a Thomson flight from London Stansted with 189 passengers on board came ‘within 1,000ft’ of a rocket as it approached Sharm El Sheikh.
The pilot turned left after he spotted the missile speeding through the air.
The jet landed safely, and holidaymakers were not told they had been seconds from disaster.

The Department for Transport confirmed the incident.