BREAKING Turkish Airlines #TK1617 from Istanbul to Frankfurt is declaring an emergency. Live: 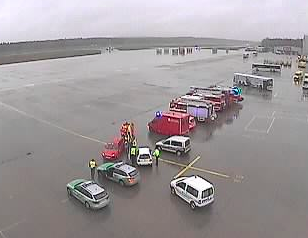 The plane took off from Istanbul’s Sabiha Gokcen Airport at 10.30 a.m. local time (0830 GMT). While on air, the pilot contacted the airport traffic control tower at Nürnberg Airport and landed out of abundance of caution, the press office said.
UPDATE #TK1617 diverted to Nuremberg after a mobile phone was found in the cabin according to the THY press office.
UPDATE #TK1617 Emergency services ready at Nuremberg.