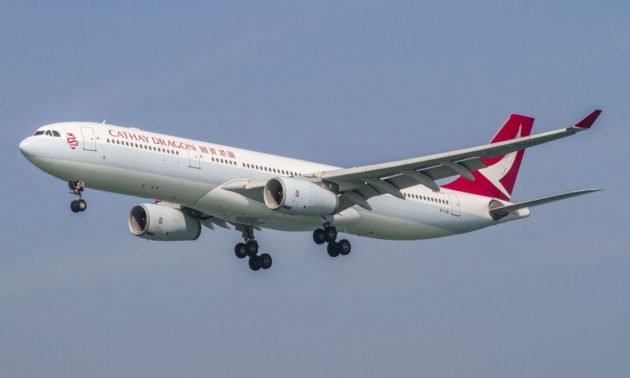 The Hong Kong Dragon Airlines Flight Attendants Association put in a public formal request that flight attendants should have the choice to wear pants. The union will meet with airline management on Monday to discuss the issue. Other items on the agenda include a 4% pay rise and roster adjustments.

All four of Hong Kong’s airlines have a skirts only rule for their flight attendants.

Hong Kong Airlines cabin crew have no union representation and struggle to raise issues such as this with the airline according to South China Morning Post sources. Hong Kong Express also declined to comment on the issue to the SCMP.

The move comes after the Cathay Pacific flight attendants union has been complaining to Cathay Pacific management over white blouses they have been required to wear the last 2 years. Complaints include the blouses being too short and leaving staff exposed when leaning over.

Asia Times says, “Pauline Mak, vice chairperson of the [Hong Kong Dragon Airlines Flight Attendants Association], said crew members would be better able to protect themselves and work more efficiently if they could wear pants on flights. She added that skirts were inconvenient when female flight attendants are helping passengers with their baggage.”

The Standard further adds, “While wearing skirts, [flight attendants] have to lean in order to squat down, adjusting their body’s center of gravity, and causing discomfort to the backbone and hand. This also make them liable to fall when lifting heavy items.”

Ms Mak also told the Standard that there have been instances of passengers taking unwanted photos of female flight attendants, and a move away from the skirts only rule could reduce those instances.

Vera Wu Yee-mei, chairperson of the Cathay Pacific Flight Attendants Union, is quoted by the South China Morning Post as saying, “The stereotype of the flight attendant is very old-style already: looking pretty, full make-up and wearing a skirt. It is a good time to have a revamp of our image. It excites us, this idea, that we can think about this direction, so maybe we can do some joint action [with Cathay Dragon] and support them to fight for this issue all together.”

Korean Airlines and Asiana Airlines are among the handful of Asian based airlines that allow female cabin crew to wear trousers.