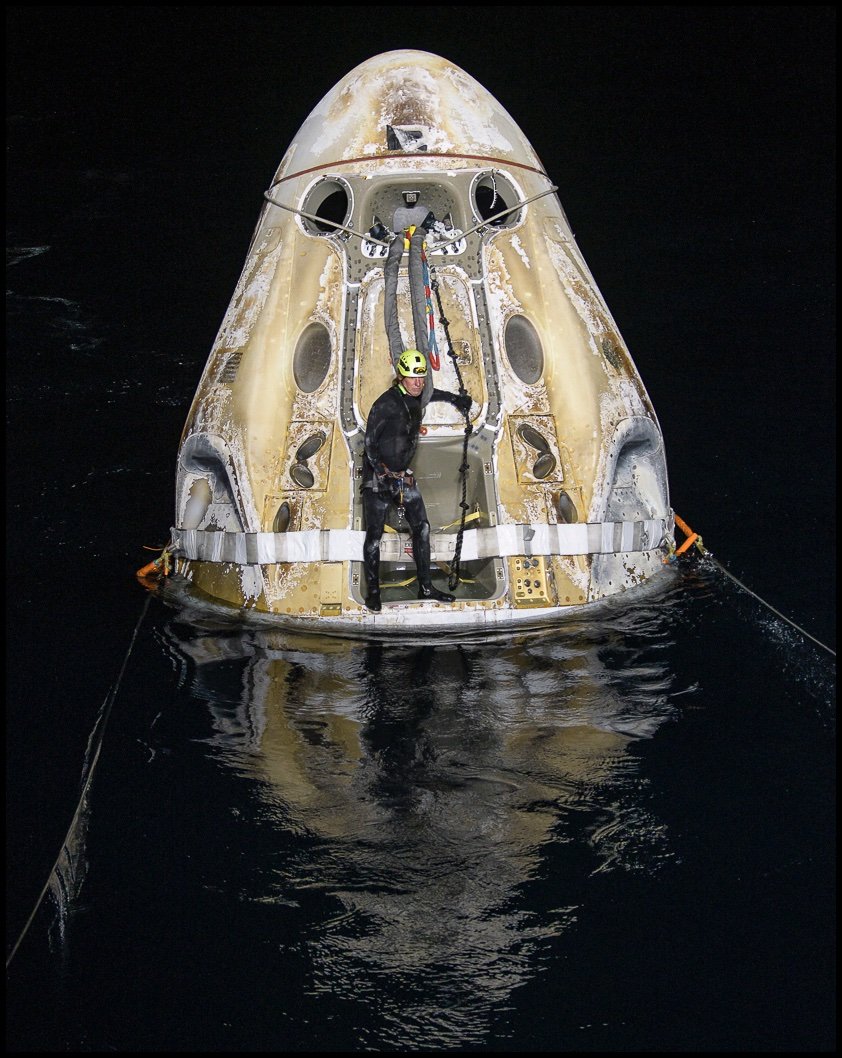 The return comes nearly six months after the crew members arrived at the microgravity laboratory and also marks the longest-duration mission of a crewed American spacecraft to date.

SpaceX’s Crew Dragon, carrying NASA astronauts Michael Hopkins, Victor Glover, and Shannon Walker, and Japan Aerospace Exploration Agency astronaut Soichi Noguchi, returned to Earth in a parachute-assisted splashdown at 2:56 a.m. EDT off the coast of Panama City, Florida. Crews aboard SpaceX recovery vessels successfully recovered the spacecraft and astronauts. After returning to shore, the astronauts will fly back to Houston.

NASA’s SpaceX Crew-1 mission launched Nov. 15, 2020, on a Falcon 9 rocket from the agency’s Kennedy Space Center in Florida. The astronauts named the spacecraft Resilience, in honor of their families, colleagues, and fellow citizens and highlighting the dedication displayed by the teams involved with the mission and demonstrating that there is no limit to what humans can achieve when they work together. Crew Dragon Resilience docked to the Harmony module’s forward port of the space station Nov. 16, nearly 27 hours after liftoff.

Overall, Hopkins, Glover, Walker, and Noguchi traveled 71,242,199 statute miles during their 168 days in orbit (with 167 days aboard the space station), completing 2,688 orbits around Earth. With splashdown, the crew also broke the American crewed spacecraft mission duration record of 84 days, 1 hour, 15 minutes, set by the final Skylab crew in February 1974.

Crew-1 also is the first night splashdown of a U.S. crewed spacecraft since Apollo 8’s predawn return in the Pacific Ocean on Dec. 27, 1968, with NASA astronauts Frank Borman, Jim Lovell and Bill Anders.

Throughout their mission, the Crew-1 astronauts contributed to scientific investigations and technology demonstrations, in addition to spacewalks and public engagement events, while aboard the orbiting laboratory. From studying protein crystal development to advance new drug discoveries, to demonstrating robotic assistant technologies, their work advances exploration of the universe while bringing benefits back to Earth.

They also grew crops in both the Advanced Plant Habitat and Veggie plant growth facilities, and conducted tests of a new method for producing semiconductor crystals. The astronauts contributed hundreds of pictures of Earth as part of the Crew Earth Observation investigation, one of the longest-running investigations aboard the space station, which contributes to tracking of natural disasters and changes to our home planet. The crew also tested a new tape dispenser, designed and produced by students as part of the High Schools United with NASA to Create Hardware (HUNCH), during the mission.

In early 2021, the Crew-1 astronauts had significant roles to play in five spacewalks outside the orbiting laboratory. Glover completed his first four spacewalks, including three alongside Hopkins, whose total number of spacewalks is now five. Noguchi joined NASA’s Kate Rubins on the fourth spacewalk of each of their careers. During the spacewalks, the astronauts connected cables on the recently installed Bartolomeo science platform, prepared the station for upcoming solar array upgrades, serviced the station’s cooling system, and completed other station maintenance tasks.

On April 5, all four Crew-1 astronauts boarded Resilience for a port relocation maneuver, moving their spacecraft from the forward-facing port to the space-facing port on the Harmony module. The move allowed for the forward-facing port to receive four Crew-2 astronauts upon their arrival to the station April 24. Later this year, SpaceX’s 22nd Commercial Resupply Services mission is scheduled to dock at the newly vacant zenith port, bringing with it the first pair of new solar arrays.

The Crew-1 flight is part of NASA’s Commercial Crew Program, which has worked with the U.S. aerospace industry to launch astronauts on American rockets and spacecraft from American soil to the space station.

The second splashdown of the Commercial Crew Program comes just over one week after the launch of NASA’s SpaceX Crew-2 mission, the second long-duration mission. The Crew-2 astronauts launched April 23 and will live and work aboard the station until their return to Earth in about six months.

Resilience will return to SpaceX’s Dragon Lair in Florida for inspection and processing. There, teams will examine the spacecraft’s data and performance throughout the flight. The next NASA and SpaceX crewed mission is Crew-3, currently targeted for launch no earlier than Oct. 23. Crew-2 astronauts are scheduled to return to Earth Oct. 31, about a week after welcoming their Crew-3 colleagues to the orbiting outpost.

The goal of NASA’s Commercial Crew Program is safe, reliable, and cost-effective transportation to and from the International Space Station. This has already been proven to provide additional research time and increase the opportunity for discovery aboard humanity’s testbed for exploration, including helping us prepare for human exploration of the Moon and Mars.