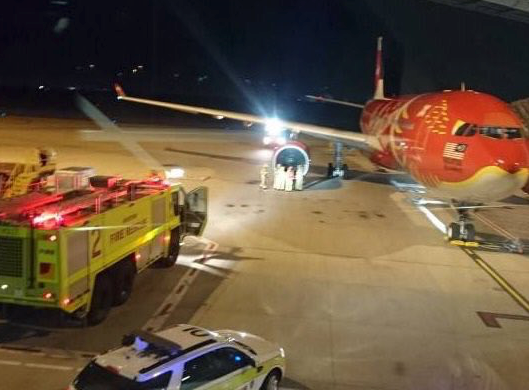 The Air Asia flight had taken off from Australia’s Gold Coast and was heading to Malaysia before the serious incident grounded the service.

The Airbus A330-300 was carrying 359 people, had to make an emergency landing in Brisbane shortly after the incident.

The Sydney Morning Herald reported that passengers heard loud noises and saw sparks coming from an engine shortly after takeoff.

Passenger Tim Joga said he heard “four or five bangs” before seeing an “orange light” outside.

He said: “The plane started shuddering then there were a couple of loud bangs and a lot of light. It started making funny noises when we were getting ready for take-off.

“About 20 minutes into the flight fire sparked out of the right-side engine.” Then the plane swooped a little bit and started shaking badly.”

A special flight was scheduled to transport passengers to their destination.