Chinese aviation authorities have defended their handling of a Beijing-bound passenger aircraft’s diversion to an eastern city after a newspaper alleged that the flight’s pilots had been forced to declare an emergency as its fuel ran low.
Pilots of the Beijing-bound China Eastern Airlines MU750 declared an emergency when smog forced the plane to divert and it was refused permission to land by two alternative airports, the Changjiang Commercial News reported on Wednesday.
Flight MU750 from Asahikawa, Japan was unable to land in Beijing on Saturday evening due to low visibility caused by heavy air pollution that had enveloped the city, it said.
The pilots of the plane, an Airbus A321 carrying nearly 200 passengers, then requested to divert to Jinan and Qingdao airports in the eastern province of Shandong. But the request was denied by local air control, who said the airports could not allow the plane to land unless its fuel was running low, the newspaper said. 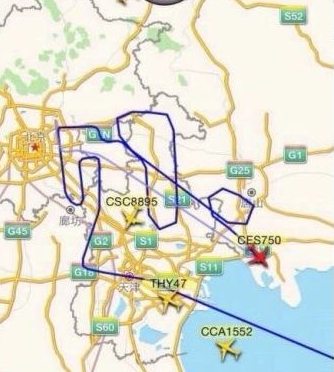 The plane was then forced to keep circling in the air east of Beijing. It was finally permitted to land at Qingdao Liuting International Airport when its fuel ran low after circling in the air for 40 minutes. The pilots declared an emergency as the plane flew towards Qingdao, the report said.
When the plane finally touched the ground at Qingdao airport after midnight, it only had enough fuel to sustain flying for another half an hour, the report said.
The report cited aviation experts as saying “the amount wouldn’t be enough for it to make a second landing attempt”.
October 29, 2014
Share this post
Share on FacebookShare on Facebook TweetShare on Twitter Share on WhatsAppShare on WhatsApp Share on LinkedInShare on LinkedIn