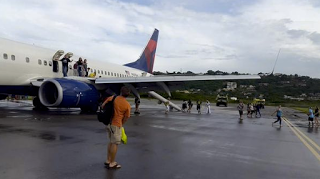 A Delta flight #DL304 from Jamaica to Atlanta had to be evacuated shortly after takeoff Monday afternoon.

The flight crew observed a flight deck warning of a possible cargo hold fire on the Boeing 737-800 and quickly activated fire suppression systems with Flight 304 in Montego Bay.

The crew stopped the plane and got all of the passengers off via slide.

There were no reported injuries among the 160 customers and six crew and Delta personnel on the scene reported that no fire was present.