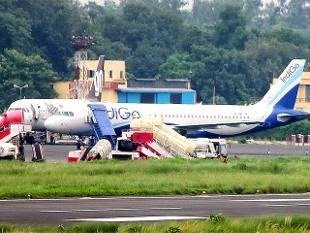 An Indore-bound IndiGo flight with 181 passengers on board made an emergency landing at Devi Ahilyabai airport here after a warning of smoke billowing from it.

All the 181 passengers, including three infants, were safe, an official said.

En-route, the pilot received a warning of smoke emanating from the cargo compartment.

Immediately, the Air Traffic Control (ATC) was contacted and after taking permission from it, the aircraft made the emergency landing at the airport around 12.01 PM, four minutes before its scheduled landing, a senior airport officer said.

The fire tenders and rescue team were stationed before the plane landed.

However, no untoward incident occurred during the landing, he said, adding, that all the passengers were taken out safely.

Meanwhile, according to a statement issued by private carrier IndiGo, initial findings into the emergency landing made by the plane suggest that the warning of smoke emanating from cargo area was “spurious”.

However, the airline’s security department was carrying out an elaborate probe into it, the statement said.