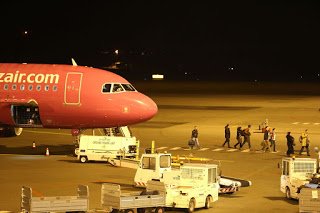 An airplane was forced to make an emergency landing in Malmo Tuesday after a man tried to kick down the cockpit door at 10,000 feet.

The Wizz Air flight from Romania to Norway was forced to land in Sweden after panicked crew raised the alarm with the pilot.

The man also allegedly tried to open two emergency exits. One witness said that the man was shouting and running down the aisle, before trying to kick down the door to the cockpit.

He was finally subdued by two other passengers.

The man was later arrested on suspicion of violating aviation laws by endangering passengers during a flight, according to police in Sweden.