EMERGENCY Passengers injured during evacuation of Thomas Cook #MT519 on the runway of Hurghada airport, Egypt 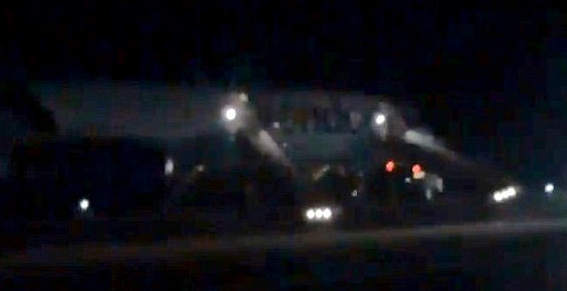 Holidaymakers were injured as they were evacuating a London-bound Thomas Cook plane in Egypt after smoke started rising from beneath a passenger’s seat.

Emergency slides were deployed from the Thomas Cook Boeing 757-300 (reg. G-JMOG) from Hurghada on Egypt's Red Sea coastline to London Gatwick, at around 1.40am local time on Wednesday.

One passenger was taken to hospital with a suspected shoulder injury following the flight's evacuation, and two others were treated at the airport clinic.

A spokesman for the travel company said: "Flight MT519 to London Gatwick carried out a controlled evacuation before take-off at Hurghada airport after the crew reported a smell of burning and smoke at the rear of the cabin.

@ThomasCookUK update on mt519 from #hurghada? Sis family stuck, bro in law injured during evac! More on twitter than ur rep telling them!!

"All 251 passengers and 9 crew members evacuated the aircraft using the emergency slides and were transported back to the terminal building.

"Our customers' safety is always our top priority and we are very sorry for the delay."