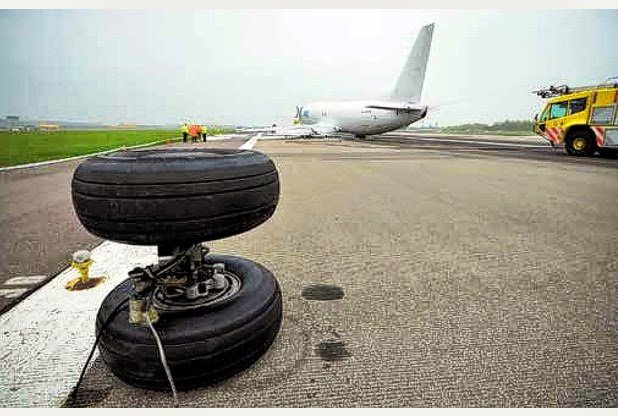 A wheel came off a plane as it came into East Midland Airport, leading to an emergency landing on the runway.

The accident happened to a Boeing 737 that was bringing freight into the country on a flight from Charles De Gaulle Airport, in Paris.

The accident forced the plane, which had two crew and no passengers on board, to skid along the runway before coming to a stop.

The report says: “During the landing at East Midlands Airport, as the aircraft’s speed reduced, the co-pilot handed control to the commander who then made a brake pedal application to disengage the automatic brake system.

“The aircraft shuddered and rolled slightly as the lower part of the main landing gear detached.

“The inner cylinder of the main landing gear had fractured, allowing the main left wheels and brakes to detach.”

The report tells how the flight started in Athens and took cargo to Paris before taking off again and heading for East Midlands Airport in the early hours of April 29 last year.

The airport left Charles De Gaulle Airport at 12.40am loaded with 10 tonnes of freight and eight tonnes of fuel, along with the commander and co-pilot. As it started its descent into East Midlands Airport, the crew alerted the control tower to a potential problem.
Source