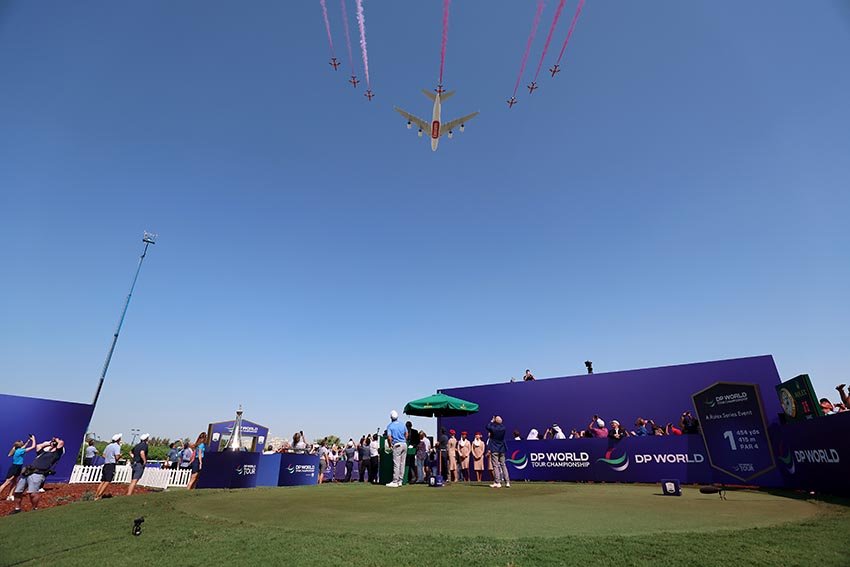 The aerial formation involved an Emirates A380 and seven of the Red Arrows’ Hawk jets flying in a “V” formation.

Emirates and the Royal Air Force Aerobatic Team, the Red Arrows, took to the skies this afternoon to celebrate the start of the DP World Tour Championship in Dubai with a spectacular flypast over Jumeirah Golf Estates, along the Sheikh Zayed Road skyline and near the iconic Burj Khalifa.

Taking off from Dubai International Airport, the Emirates A380 made its approach over Jumeirah Golf Estates, joined by the RAF Red Arrows as World Number One golfer Rory McIlroy and three-time DP World Tour winner Ryan Fox, teed off at 1240hrs Dubai time. As the group of aircraft flew at an altitude of just 1,000 feet over the skies of Jumeirah Golf Estates, the seven Red Arrows aircraft released red smoke trails to signal the start of the action at the DP World Tour Championship.

The aerial grouping then continued along Sheikh Zayed Road, stepping up its altitude to 3,000 feet, at a speed of 250 knots, to finally reach and pass the iconic Burj Khalifa before heading west towards the Dubai coastline where all aircraft broke formation and continued on to their respective airports for landing.

Today’s flypast underscores the airline’s long-standing commitment to golf, its fans around the globe, and bringing prestigious, high-caliber events to its home base of Dubai. The airline’s partnership with the season-ending DP World Tour Championship stretches all the way back to 2009. For over 13 years, the airline has carried more than 600 professional golfers to Dubai to play in the DP World Tour Championship, attracting more than 200,000 golf enthusiasts to the exciting tournament.

Emirates is the Official Tournament Partner at 14 events on the DP World Tour calendar each season, with a strong brand presence on course boards across 21 DP World Tour tournaments and on the Tour’s media and digital platforms. The airline is also a partner of the Tour’s Virtual Eye, delivered through live television broadcasts which provide real-time positioning and information about player performance and statistics.