Eurowings adds first Airbus A340 to its fleet 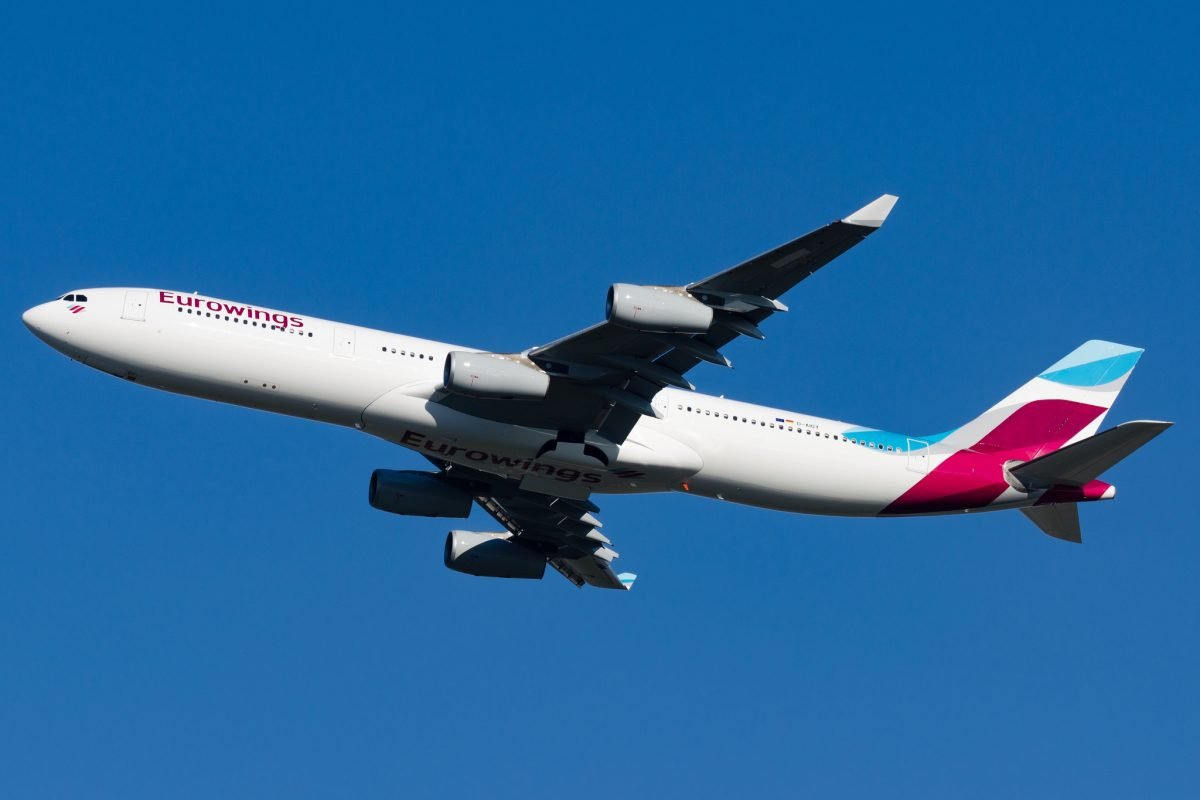 Former Lufthansa CityLine Airbus A340-300 D-AIGY shortly after painting in Rome. This aircraft is now registered as OO-SCW and flying for Eurowings (operated by Brussels Airlines). Photo Credit: matteo.buono89

Eurowings has received its first Airbus A340-300.

The German low-cost carrier started testing the commercial capabilities of the A340-300 on regular scheduled short haul flights within Europe on Tuesday. OO-SCW, its first aircraft of this type, is operated by Lufthansa Group affiliate Brussels Airlines. Since being delivered in 2000, it was part of the Lufthansa fleet as D-AIGY, but was withdrawn from use in mid-2017 and then given to Brussels Airlines earlier this month.

So far, Eurowings only uses 7 Airbus A330-200 (operated by SunExpress Germany) and one temporary leased Boeing 767-300ER on its long haul flights.

For the beginning, the four-engined Airbus jet is exclusively flying on the airline’s routes Düsseldorf – Vienna and Düsseldorf – Palma de Mallorca. A second A340-300, as well as an A330-300 will join the fleet (all operated by Brussels), before the first long haul routes with Eurowings’ new aircraft types are due to start from Düsseldorf Airport on April 28th, the airline told AIRLIVE.net.

Routes Düsseldorf – New York and Düsseldorf – Miami are currently operated by Lufthansa (using Airbus A330-300) and will be handed over to subsidiary Eurowings on dates shown above. Eurowings already operates non-stop long haul flights from Düsseldorf to Cancun, Varadero, Punta Cana and Puerto Plata. Flights to Orlando were also started but later cancelled. The airline has more than a dozen long haul destinations from Cologne Bonn Airport, these routes are due to be transferred to Düsseldorf Airport until the end of this year.

According to Lufthansa CEO Carsten Spohr in an interview in October 2017, Eurowings also plans a non-stop connection between Düsseldorf and Los Angeles. No details on this route have been announced since then.

“We see strong demand for another top product from our company on routes with a higher proportion of business travel, for example on US flights from Düsseldorf to New York, Miami or Fort Myers.“

In November last year, Eurowings announced it would triple the size of its long haul fleet in 2018. The airline wants to fly a total of 21 widebody aircraft at the end of this year. Details such as types of aircraft that come to Eurowings’ fleet are not yet known. Further Airbus A330-300 and A340-300 deliveries (operated by Brussels Airlines) are likely.