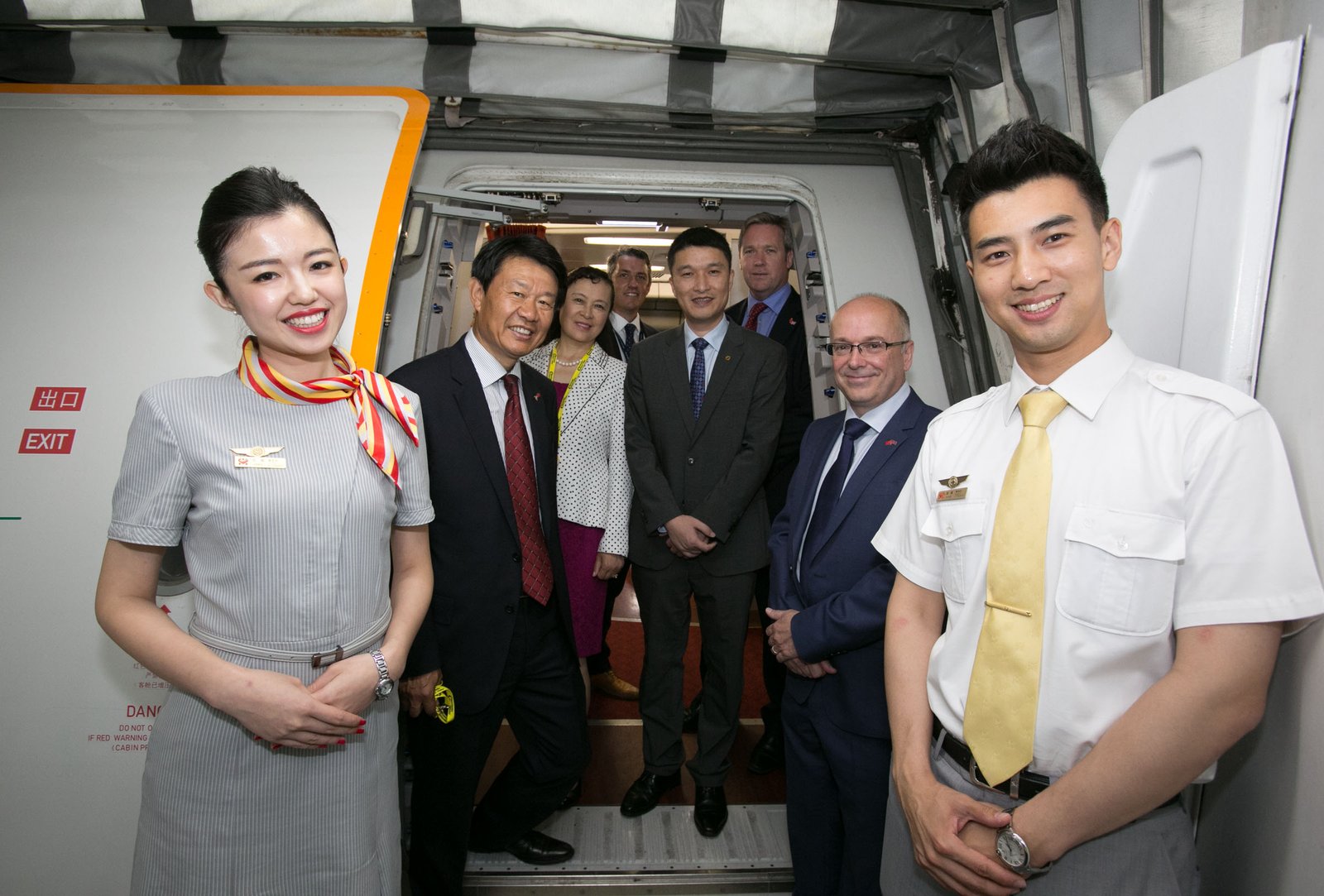 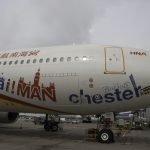 Closeup picture of the Hai Manchester Livery inserted onto this aircraft for the launch of the Manchester Airport route – Picture by James Field. 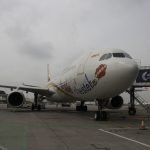 Picture of B-8287 on Stand 202R at Manchester Airport – Picture from James Field. 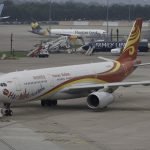 On June 10th, Chinese Carrier Hainan Airlines launched their brand new Manchester route from Beijing. B-8287, their Airbus A330-300 in the Hai Manchester Livery arrived at around 6am and departed at 12:25pm. This is a significant route in terms of UK Aviation History as well as Manchester’s history as this is the first direct Chinese route in the North West, which significantly benefits the Northern Powerhouse sector of our country. This route is also significant to our economy as it has a value of £250m over the next decade and will save travelers £5m in journey time savings over the next decade as passengers going to the UK have to go to Heathrow to go onwards to China.

The link between Hainan and Manchester Airport is significant in terms of the route being the only direct service to Mainland China from the North West! – Picture by James Field.

This route was announced in October 2015 by His Excellency Xi Jinping as well as UK Prime Minister David Cameron, stating that the route would be operating 4 times per week and will link Manchester and Beijing, opening up a wealth of trade and tourism opportunities. This route has been welcomed by many businesses, universities and tourism bodies across the whole of the North of the UK.

Transport Minister Andrew Jones said:  “The new route between Manchester and Beijing is a testament to the strength of the Northern Powerhouse, opening up the North of England to investment while benefitting the many thousands of people who currently travel between the cities each year. Not only will this add an estimated quarter of a billion pounds to the local economy over the next decade, it will open new opportunities for businesses in both countries, boost tourism between China and the UK and will encourage students in both countries to experience studying in a new and different culture.  This is an exciting new development for Manchester, the North of England and the UK.”

Secretary of State for Culture, Media and Sport John Whittingdale said: “This new route is a major breakthrough that will help boost tourism in the north of England. We want more Chinese tourists to enjoy the beauty and vibrant culture that can be enjoyed right across Britain.  China is a hugely important trading partner and more Chinese visitors coming to the UK is great news for the tourism industry and the whole economy.”

Ken O’Toole, CEO of Manchester Airport said: “Today’s inaugural flight with Hainan Airlines is clear evidence of the vital economic role that Manchester Airport plays both nationally and regionally within the UK. Providing a direct link between the two cities unlocks significant trade and investment opportunities, which will serve as a shot in the arm to efforts to create a reenergised Northern economy. This direct route will also have a significant impact on inbound tourism across the whole of the North. And the early indications are good, with summer load factors currently averaging out at more than 80%. Finally, it will also deliver a boost to universities, both in terms of providing a vital service for Chinese students and their families, and when it comes to finding commercial applications for the world-leading research being carried out by these institutions.”

Xie Haoming, President of Hainan Airlines, said: “We are delighted to commence our direct scheduled service to Manchester. Beijing to Manchester’s inaugural outbound and inbound flight load factors have reached over 90%, which is incredibly strong for a new route. A great number of travel agencies expressed their strong interest in working with Hainan Airlines, based upon the new route, which is encouraging for future travel between the two cities. With the ‘Golden Age’ of travel starting between China and the UK, it is foreseeable that the market between the two countries is entering a prosperous period. I am sure the route between Manchester and Beijing will be incredibly popular and we look forward to developing our relationship with the city.”

Hainan Airlines is China’s biggest privately-owned airline, and since 2011, they have had a consecutive spree of success. Since 2011, the airline have won 5 consecutive global Skytrax five-star Airline ratings. Hainan are one of seven airlines in the world to keep this spree of success consistently. Last year, Hainan Airlines was rated the Best Airline in China, by Skytrax themselves.

This route on the Airbus A330-300 is operated with 2 configurations, Business Class, nearer to the front of the aircraft as well as Economy Class, which is located towards the middle and the back of the aircraft. On both of the inbound and outbound flights, the airline have reported an average of 90% in terms of load factors, suggesting how much of a success this route has been for Hainan, even at the start.

Within the Business Class, there is In-Flight-Entertainment available for passengers who can choose from a range of movies, songs and much more. See below: 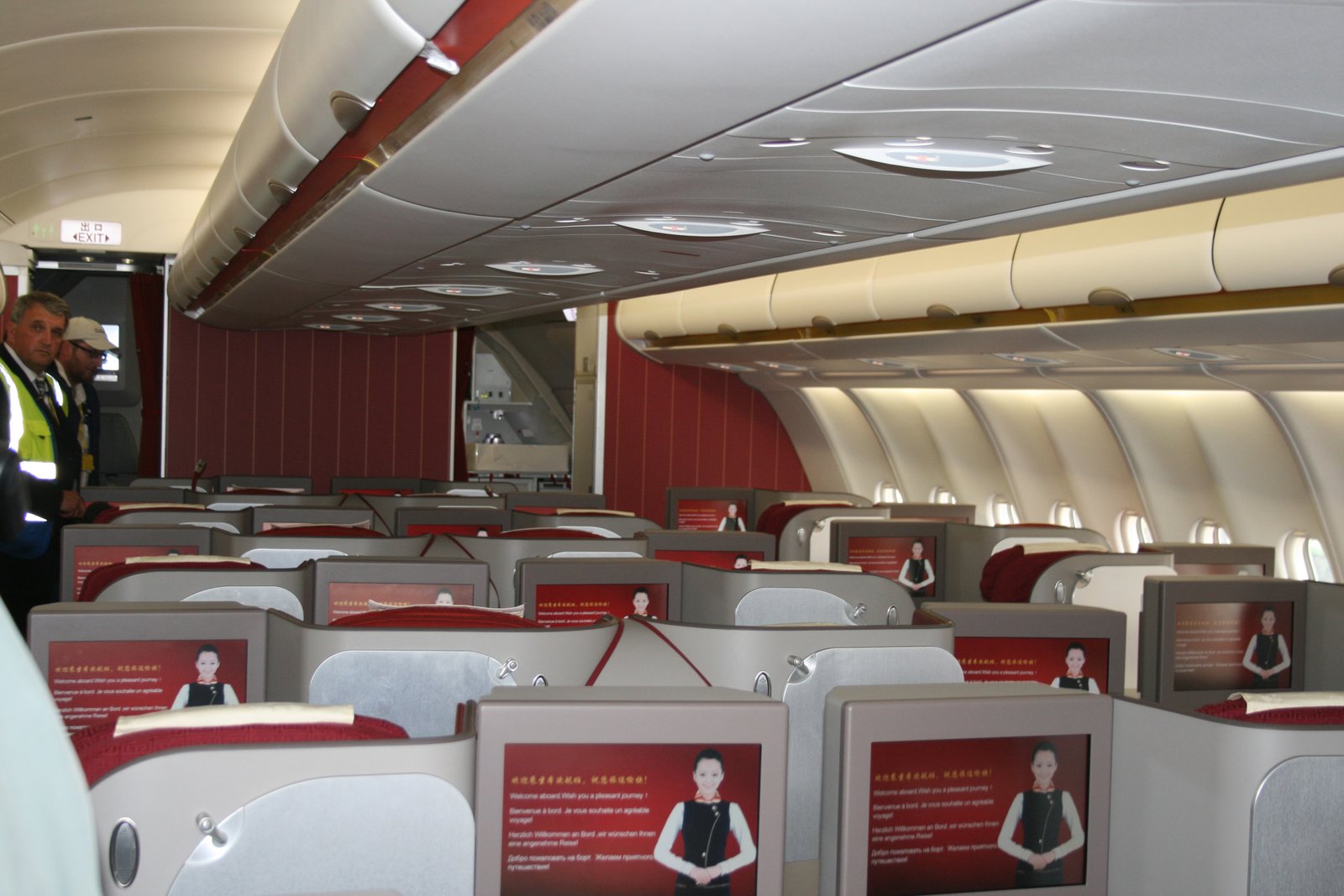 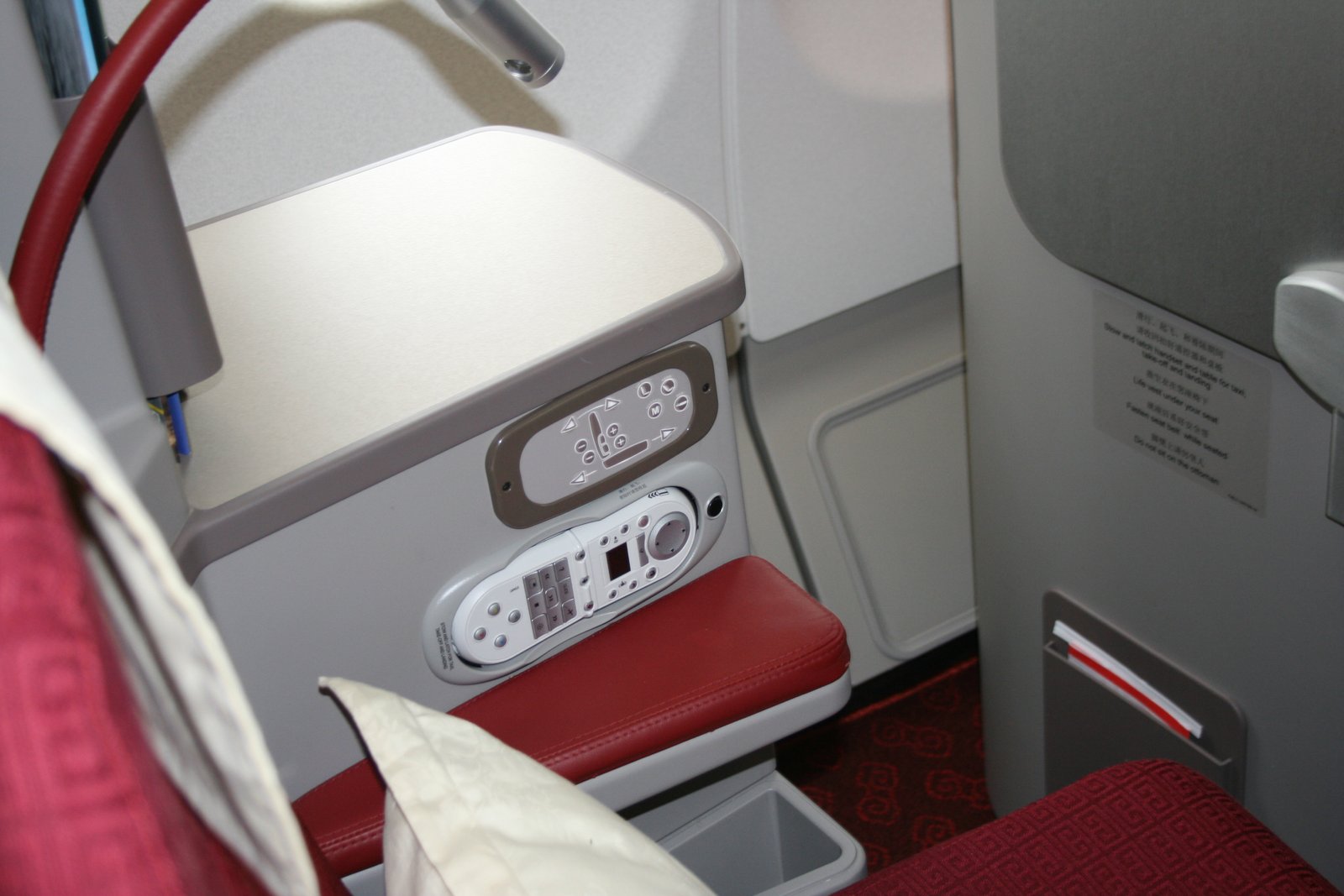 Journalist James Field also broadcasted a more in-depth view of the aircraft that you can check out by clicking here! Below are pictures of the people in the speech, featuring Charlie Cornish, the CEO of Manchester Airports Group, the Transport Minister Andrew Jones as well as Hainan Airlines President Xie Haoming. You can also have a look at the speeches given by the people mentioned by clicking here! 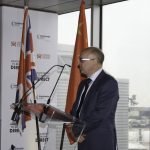 Picture of Charlie Cornish, the CEO of Manchester Airport Groups giving a speech during the event – Picture by James Field. 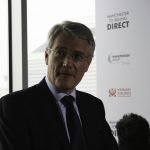 Picture of Andrew Jones, the Transport Minister of the UK giving a speech during the event – Picture by James Field. 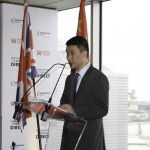 The President of Hainan Airlines Xie Haoming giving a speech during the event – Picture by James Field.

After the speeches took place, James and all of the other members of the press were invited to airside to take some extra pictures of the ribbon cutting to celebrate the inaugural launch of the outbound flight. Featured within these shots were the CEO of MAG Andrew Cornish as well as the Hainan Airlines President Xie Haoming. 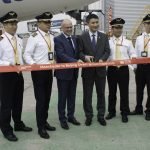 The CEO of MAG Charlie Cornish with Hainan Airlines President Xie Haoming with the fresh new crew of the outbound flight before the Ribbon Cutting to celebrate the flight’s success! – Picture by James Field. 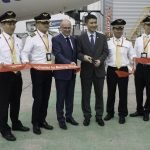 The CEO of MAG Charlie Cornish with Hainan Airlines President Xie Haoming with the fresh new crew of the outbound flight after the Ribbon Cutting to celebrate the flight’s success! – Picture by James Field.

After the ribbon cutting, Cornish and Haoming were seen shaking hands to give the aircraft the final send-off before the outbound flight was due to depart from the stand! 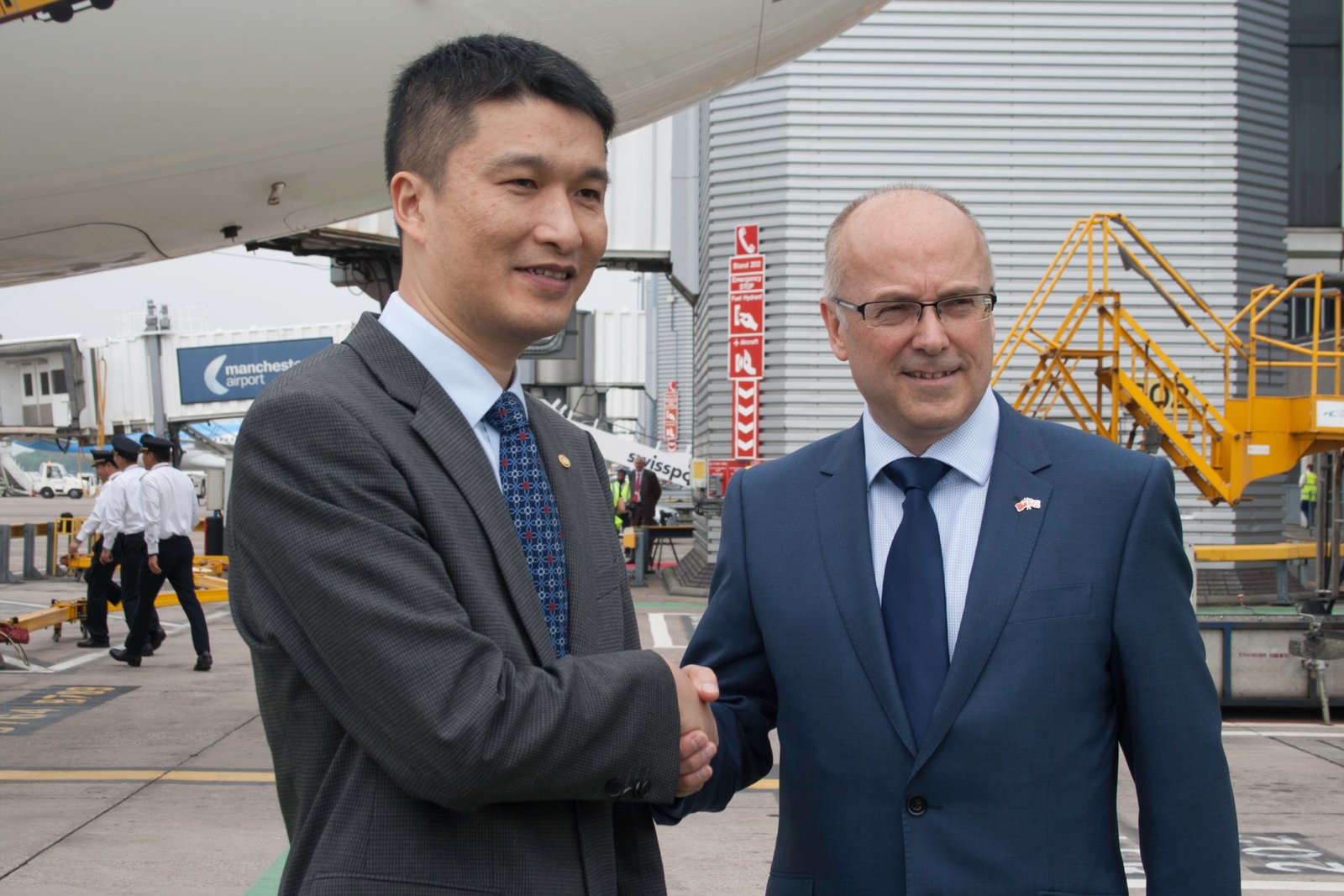 Picture of Hainan Airlines President Xie Haoming and Charlie Cornish, the CEO of MAG shaking hands and giving the aircraft the final send-off before departure! – Picture by James Field.

Overall, the launch seemed to be very successful and will be successful for many years to come. Evidence that substantiates this view is through the excellent load factors as well as the enthusiasm by both parties in maintaining a key route for Manchester’s Northern Powerhouse. It will be very interesting to see what happens now in terms of the Chinese Market. This is mentioned because when I was interviewing Ken O’Toole, the CEO of Manchester Airport, he mentioned that the airport is in talks with Air China about a “potential Shanghai route”, meaning that there could be more additions to the English-Chinese economy as well as extended competition within the Chinese market as Shanghai is considered as the Business Capital of China.

This is the start of something very successful for the airport. Next year, the Airport will be expanding their Middle Eastern Portfolio with the launch of Oman Air with the Airbus A330 as well as potentially expanding the Chinese sector even further with a potential Air China route in the making. It will be interesting to see whether Hainan’s presence will expand, especially with the expansion of the airport to come in the next decade or so. There has been speculation about Hainan potentially adding a second route if the Manchester-Beijing link is successful and has significant load factors in the long-term. The latest figures from the Office for National Statistics (ONS) stated that there is “stellar growth” in the Chinese market as the visiting rate increased by 46% in 2014 to 270,000 tourists and that tourists spending has gone up 18% to £586 million, showing that there is the demand for an expansion of Chinese routes.

In terms of Chinese tourism in our country, there is even more evidence to suggest that the demand is there:

All in all, this is a significant route for UK Aviation as well as for the North West of England. It will be interesting to see whether this is the start of the huge expansion that Manchester so hopes and so adamantly wants.