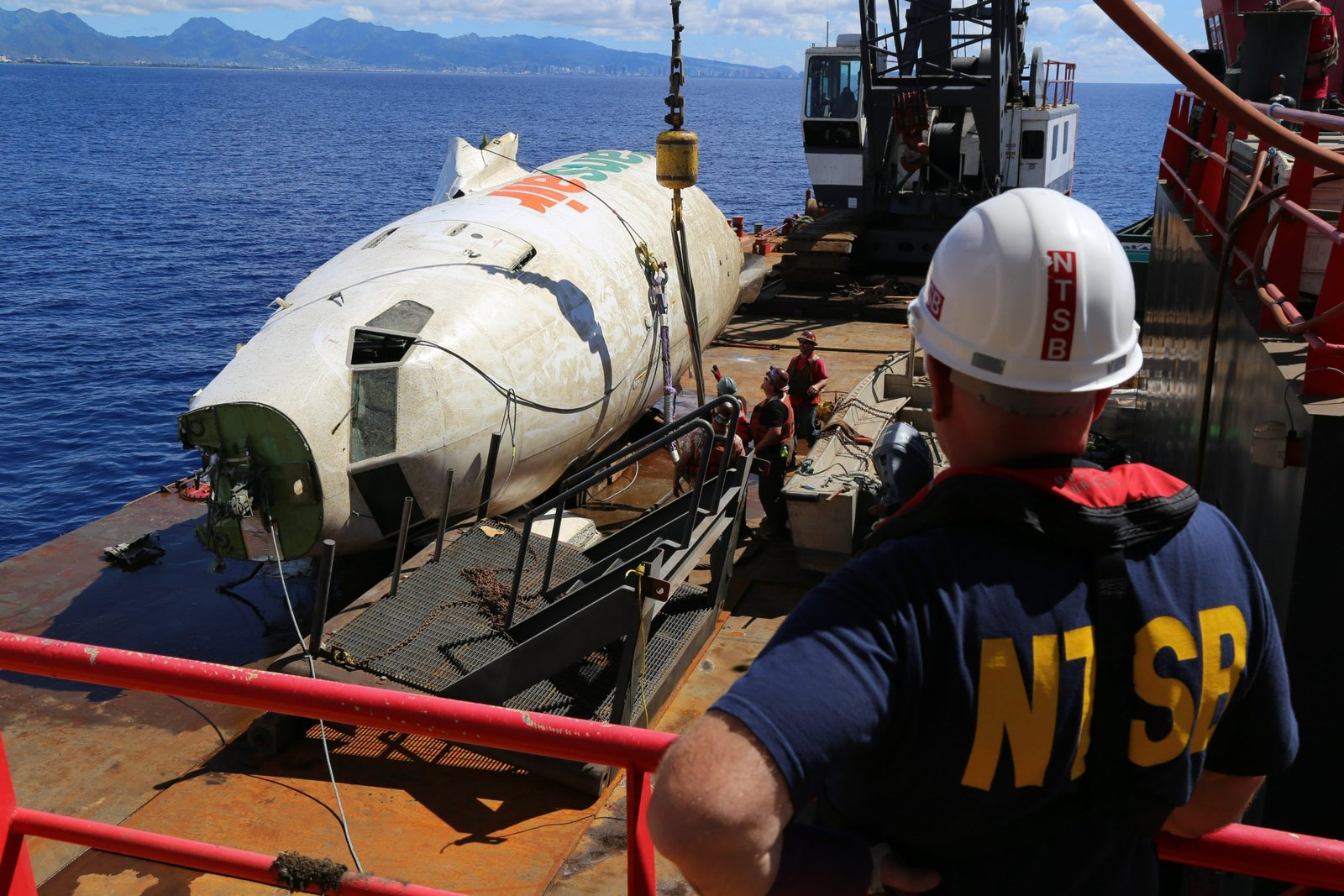 Flight recorders and all major components of a cargo jet have been successfully recovered from the Pacific Ocean, the National Transportation Safety Board announced Tuesday.

The recorders and wreckage recovered were from a Boeing 737-200 freighter, operated as TransAir flight 810 when it was ditched after the flight crew reported anomalies in both engines shortly after takeoff from Daniel K. Inouye International Airport, Honolulu, Hawaii, on July 2, 2021.

The two pilots, the only occupants onboard, survived. The wreckage came to rest on an ocean shelf at a depth ranging from 350-450 feet.

Four of the six cargo containers remained in the aft section of the fuselage; the other two containers were found separate but near the wreckage. A pallet of cargo was found during the initial search operation.

In the months following the accident, TransAir’s insurance provider contracted with several companies to recover the wreckage and cargo. These included the Eclipse Group, which operates the Bold Horizon, a San Diego-based research vessel equipped with a remotely operated vehicle (ROV) and other underwater retrieval equipment. A California-based barge, the Salta Verde, was contracted to lift the two sections of the fuselage and transport them to shore in Honolulu.

On the morning of Oct. 12, the Bold Horizon left port in Honolulu for the recovery site with two NTSB investigators, two engineers from Boeing and a team of recovery specialists. After the ROV was used to rig the engines with cables and front landing gear assembly with a strap, all three items were recovered and brought to shore on Oct. 17.

The Bold Horizon set off again on Oct. 18 to recover the fuselage. The forward section of the fuselage, which measures 37 feet long and weighs about 15,500 pounds, was recovered to the barge on Oct. 20 and brought to shore at Barbers Point in Kapolei, Hawaii, on Oct. 22.

The aft section of the fuselage is about 63 feet long and weighs about 48,500 pounds empty and about 60,500 pounds with the four cargo containers. It was significantly larger and more challenging to lift than the forward section of the fuselage. After engineers and ROV operators rigged it so the wings and tail would not separate during the lift, the fuselage was recovered to the surface and placed on the barge on Oct. 30 and brought onshore at Barbers Point on Oct 31.

The flight data recorder and the cockpit voice recorder will be transported to the NTSB laboratory in Washington where they will be cleaned, dried, downloaded and analyzed.

Investigators will perform a detailed documentation of both sections of the fuselage, which will remain in Hawaii.

The engines were documented, crated, and will be returned to the barge Salta Verde to sail back to the mainland where each will undergo a teardown examination supervised by an NTSB investigator.

The investigation, which is expected to be completed in 12-24 months, will include a comprehensive examination of the airplane structure, engines, systems, maintenance, survival factors, vehicle performance, air traffic control, human factors, federal oversight and emergency response.