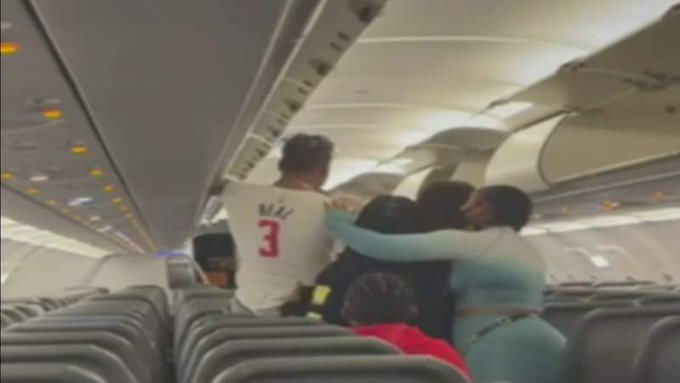 It was chaos in a Frontier Airlines flight that arrived from Philadelphia. The fight occurred after the plane had landed at Miami Airport.

According to a passenger, who recorded the fight, the fight started after one of the passengers took too long to collect his bags, and the other passenger was not so happy about it.

The fight could have sparked after a white passenger used racial words against the black passenger; the two passengers initially were involved. However, other people were also soon involved, including the family members, who stepped in to fight, other passengers, and a flight attendant who tried to stop the fight.

“You can see the white man on top of the Black passenger just beating him between the seats. The flight attendant got involved. The white man’s wife got involved. His son, I believe, and his son’s girlfriend, everyone was just involved,” she said.

“The Black passenger had to wait on the plane when he didn’t even start it, and the police, while we were walking off the plane, walked right past the person, the white man who actually initiated everything,”

Witness says that the white man responsible for starting the fight had been let free, and the black man was put to hold for some time. However, police say that the black man wasn’t held back. He chooses to stay behind so that he could file a police report. However, after some time, he decided not to press charge.