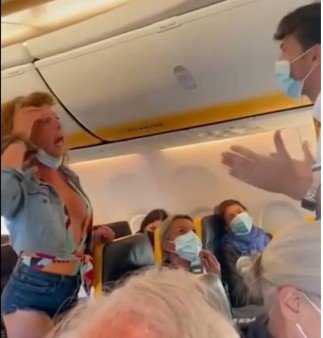 An Italian woman was dragged off Ryanair flight after violently attacking a fellow passenger after others asked her to wear a face mask.

She reacted by verbally insulting and spitting on them. She was also seen repeatedly kicking the crew members and also shouting insults at them.

The incident reportedly happened on a Ryanair plane that was about to take off from Ibiza, Spain, on Wednesday last week.

Video footage shared on the internet shows the woman attacking others on the plane. Several crew members can also be seen attempting to remove her from the plane.

According to the airline, face masks covering both the nose and mouth are mandatory at all times in the airport and on board all flights.

However, it is not known whether the unruly passenger faced any criminal charges or not.