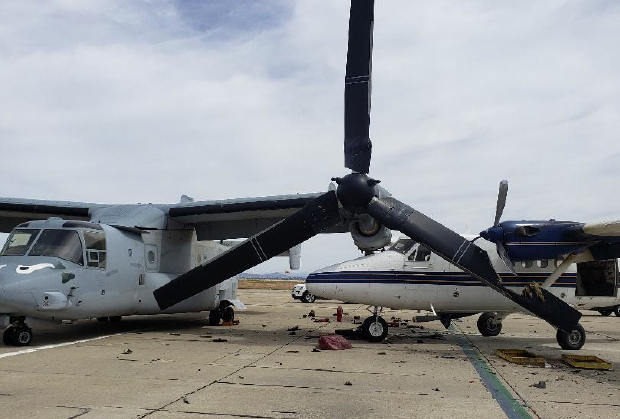 A civilian Twin Otter airplane rolled and crashed into a Marine Corps MV-22B Osprey parked on a ramp at an airfield and caused extensive damage to both aircraft, according to officials and an incident report.

The Marine Corps is investigating the incident, which involved an Osprey belonging to Marine Medium Tiltrotor Squadron (VMM) 163, based at Miramar Marine Corps Air Station in San Diego.

Marines had been conducting routine training in the area and had parked the Osprey at the airfield. “No Marines were present at the time of the mishap,” 3rd Marine Aircraft Wing officials said in a statement to USNI News.

The Twin Otter airplane – a 1967 De Havilland DHC-6-100, tail number N52FW – is registered to Kapowsin Air Sports, according to FAA records. The twin-engine plane, which carries two pilots and up to 22 passengers, is operated by Kapowsin, a skydiving center based in Shelton, Wash.

The Marine Corps classified it as a “Class A” mishap, meaning the estimated damage is at least $2 million. The Osprey suffered damage mostly on its left side, to the engine compartment, wing and landing gear, as well as to both the left and right propellers, according to an incident report compiled by the city of San Diego.