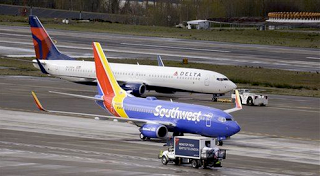 Two commercial planes flirted with disaster tonight after beginning their takeoffs on intersecting runways at Chicago Midway International Airport, the Chicago Tribune reports. “Stop, stop, stop, stop!” an air controller can be heard shouting on a recording of the incident posted at LiveATC.net. The two pilots—one on Southwest flight 3828, the other on Delta Air Lines 1328—were each going at full takeoff power when they hit the brakes 2,000 to 3,000 feet short of the runway intersection. It happened at about 7:40pm, CNN reports. “Were we the ones cleared for takeoff?” asks the Southwest pilot.

From the transmission, it sounds like the planes’ similar numbers created confusion. The controller had even warned the pilots about this ahead of time, but when the Southwest pilot radioed back to confirm his takeoff, his voice was “stepped on” or obscured by a second transmission that may have come from the Delta flight. The controller can later be heard telling the Delta captain to report his mistake. “Just knowing that there were two aircraft of that size headed to the same intersection at the same time … this could have been catastrophic,” a commercial pilot tells CBS Chicago. The National Transportation Safety Board will likely investigate.