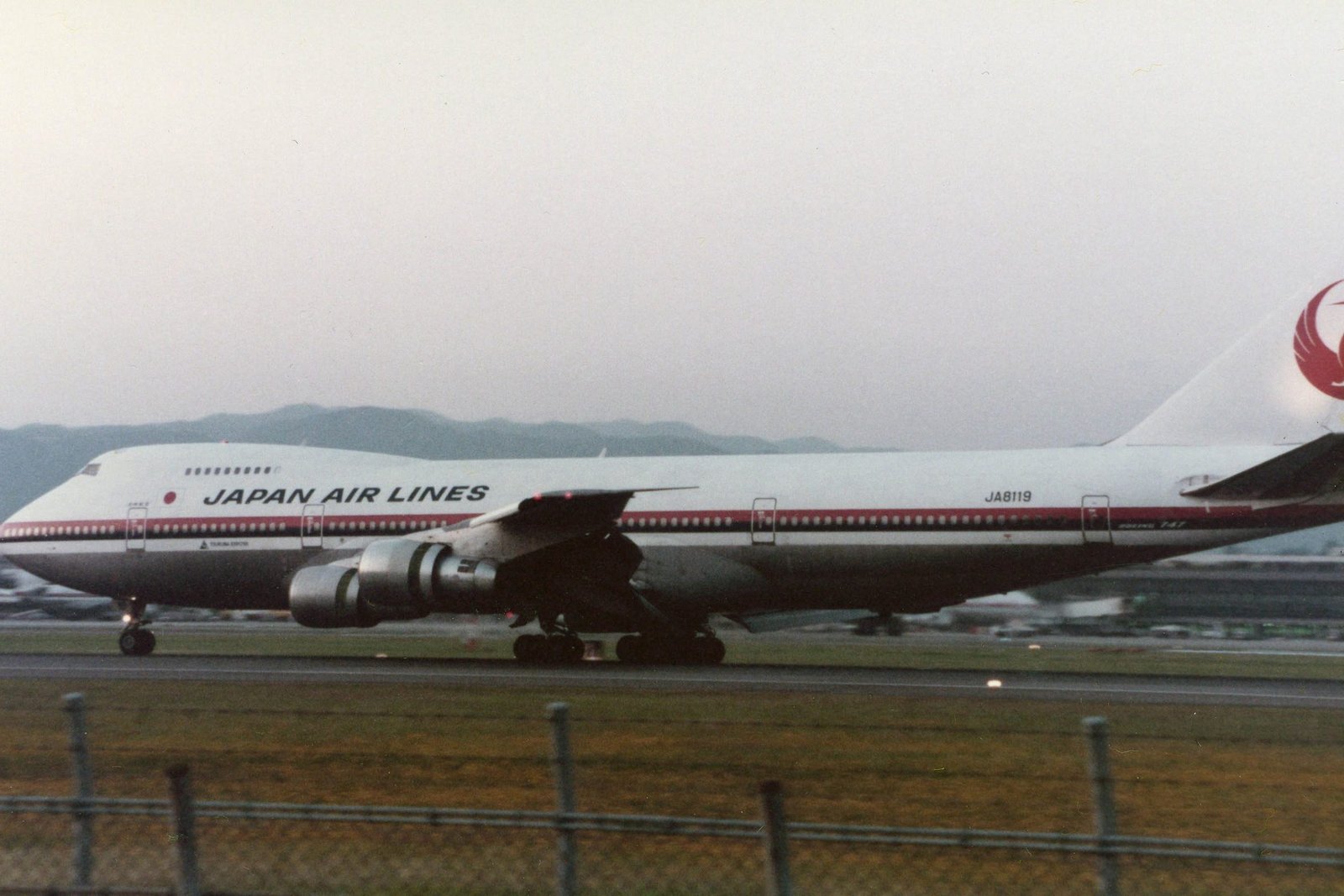 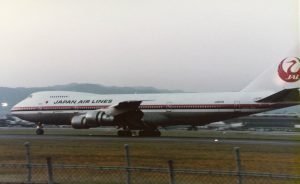 At the time of the accident the aircraft was on the fifth of its six planned flights of the day. There were fifteen crew members including three cockpit crew and 12 flight attendants.

The Captain was Masami Takahama, 49 from Akita, Japan. He was a veteran pilot, having logged approximately 12,400 total flight hours – roughly 4,850 of which were accumulated flying 747’s. Takahama served as a training instructor on the flight supervising the First Officer while handing radio communications.

The First Officer was Yutaka Sasaki, 39 from Kobe, Japan. He had approximately 4,000 total flight hours to his credit and logged roughly 2,650 hours in the 747. Flight 123 was a training flight flown by Sasaki in order for him to be promoted to Captain.

The Flight Engineer was Hiroshi Fukuda, 46 from Kyoto, Japan. He was a veteran flight engineer and had approximately 9,800 total flight hours, of which roughly 3,850 were accrued flying 747s. 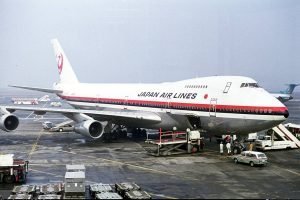 The aircraft landed at Haneda from New Chitose Airport at 4:50PM as Japan Airlines Flight 514.

After more than an hour at the ramp Flight 123 pushed back from gate 18 at 6:04pm. At 6:12pm Japan Airlines Flight 123 took off from Runway 15L at Haneda Airport, Tokyo, Japan. 12 minutes behind schedule. 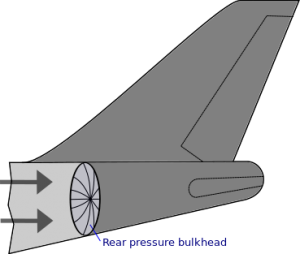 About 12 minutes after takeoff, at near cruising altitude over Sagami Bay, the aircraft’s aft pressure bulkhead burst open. This caused an explosive decompression, causing pressurized air to rush out the cabin, bringing down ceiling around the rear lavatories. The compressed air then burst the unpressurized fuselage aft of the bulkhead unseating the vertical stabilizer and severing all four hydraulic lines. 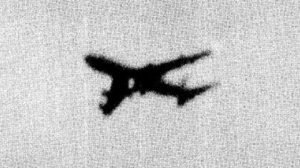 A photograph taken from the ground confirmed that the vertical stablilizer was missing. Loss of cabin pressure at high altitude caused a lack of oxygen throughout; emergency oxygen masks for passengers were deployed. Flight attendants, including one off-duty administered oxygen to various passengers using hand-held tanks. 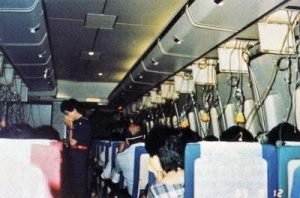 The pilots set their transponders to broadcast a distress signal. Tokyo Area Control Center directed the aircraft to descend and follow emergency landing vectors. Because of control problems Captain Takahama requested a vector to Haneda opposing ATC’s suggestion to divert to Nagoya Airfield, knowing Haneda was ideally suited for a 747 in case of an emergency.

Hydraulic fluid completely drained away through the rupture. With total lost of hydraulic control and non-functional control surfaces, plus the lack of stabilizing influence from the vertical stabilizer, the aircraft began up and down oscillation in phugoid cycle. In response the pilots exerted efforts to establish stability using differential engine thrust. Further measures to exert control, such as lowering the landing gear and flaps, interfered with control by throttle; the aircrew ability to control the aircraft deteriorated. 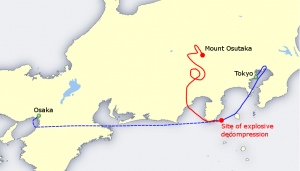 Upon descending at 13,500ft the pilots reported an uncontrollable aircraft. Heading over the Izu Peninsula the pilots turned towards the Pacific Ocean then back towards the shore; they descended below 7,000ft before returning to climb. The aircraft reached 13,000ft before entering an uncontrollable descent into the mountains and disappearing from radar at 6:56pm at 6,800ft. 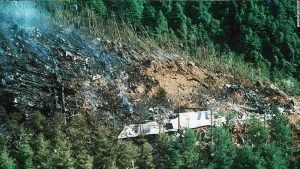 In the final moments, the wing clipped a mountain ridge. During a subsequent rapid plunge, the plane then slammed into a second ridge, then flipped and landed on its back. The aircraft’s crash point, at an elevation of 5,135ft.

The elapsed time from the bulkhead explosion to when the plane hit the mountain was estimated at 32 minutes – long enough for some passengers to write farewell messages to their families. None of the four flight crews in the simulator was able to keep the plane aloft for as long as the 32 minutes achieved by the actual crew.

Due to the delay in the rescue operation a few of the occupants had survived the crash only to die from shock and exposure overnight in the mountains or from injuries that if tended to earlier would not have been fatal. In total 520 passengers & crew were killed. Only 4 survived.

The investigation was led by the Japan Aircraft Investigation Commission. They concluded that:

The aircraft was involved in a tailstrike incident at Osaka International Airport seven years earlier as JAL Flight 115 which damaged the aircraft’s rear pressure bulkhead. The subsequent repair of the bulkhead did not conform to Boeing’s approved repair methods. 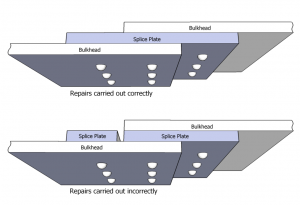 The Boeing technicians fixing the aircraft used two separate splice plates, one with two rows of rivets and one with only one row when the procedure called for one continuous splice plate (essentially a patch or doubler plate) with three rows of rivets to reinforce the damaged bulkhead. The incorrect repair reduced the part’s resistance to metal fatigue to about 70% compared to the correctly executed repair. According to the FAA, one splice plate which was specified for the job was cut into two pieces parallel to the stress crack it was intended to reinforce, “to make it fit”. This negated the effectiveness of one of the rows of rivets. During the investigation, Boeing calculated that this incorrect installation would fail after approximately 10,000 pressurisation; the aircraft accomplished 12,318 successful flights from the time that the faulty repair was made to when the crash happened.

When the bulkhead gave way, the resulting explosive decompression ruptured the lines of all four hydraulic systems and ejected the vertical stabilizer. With the aircraft’s flight controls disabled, the aircraft became uncontrollable.