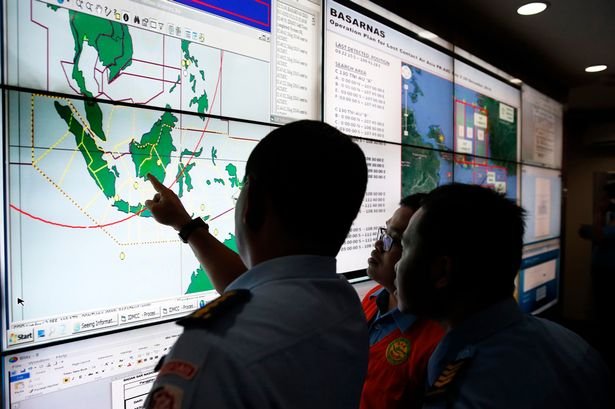 JC Mac Farlane @Macfarlane123
It’s been less than 48 hours since AirAsia flight QZ8501 went missing but the conspiracy theorists are already at it.
After MH370 and MH17 its the third Asian passenger plane to meet a bizarre and unexplained end.
This time there were 162 passengers on board the flight from Indonesia to Singapore when communications were lost.
The search has resumed today but so far there are no answers as to what happened.
Experts have put forward their own potential explanations while people on social media have not been shy about suggesting their own opinions, however unfounded.
Here we look at some of the potential theories and conspiracies that are currently doing the rounds about the Indonesia flight – some more outlandish than others.

1.The plane was hijacked remotely

Remote Hijack: The idea the plane was hijacked is one of the more conspiratorial theories for AirAsia Flight QZ8501

One theory that has popped up on reddit is that the plane was hijacked remotely.
The poster OB1 kenobi wrote: “Someone is testing their remote pilot override capabilities.
“Maybe at longer distances, or on an Airbus to see if they can takeover non-US built aircraft.”
The same theory emerged after the disappearance of flight MH370.

2.Physical problem with the plane

Mechanical Failure: There could have been a physical problem with the plane, but experts say there isn’t precedent with the model

There have been 26 crashes involving the A320 plane since it was introduced in 1988 – an average of one a year.
But aviation expert Gideon Ewers told Sky News all of those crashes were caused by other issues than problems with the plane.

Poor Weather: The last communication between QZ8501’s pilot and air traffic control was when he requested to increase altitude due to bad weather

Before the plane disappeared, the pilot asked to increase altitude to avoid poor weather conditions.
And this time of year is tropical storm season in this time of year – the tsunami of ten years ago was on Boxing Day and the Philippines is regularly hit by major hurricanes.
Australian Prime Minister Tony Abbot said he believed the plane had crashed as a result of “horrific” weather.
But aviation expert Captain Mike Vivian told Sky it was ‘unlikely’ that sudden weather was the cause – pilots flying in Asia are used to having to deal with them.

Economic Terrorism: One theory argues that three missing Asia planes is all part of a move to destabilise Asia’s economy

Another conspiracy theory is that this and the other missing flight are part of an act of ‘economic terrorism’ against Asia.
The mysterious disappearance of flights inevitably has a knock on effect as many people become too scared to fly or simply think it’s not worth the risk.
With three flights all having unfortunate or mysterious endings will only add to that preception.

Experienced Pilot: Human error is a possibility but AirAsia’s Captain Irianto had thousands of hours experience

Pilot error is always a possible cause when a plane crash takes place – if that’s what happened here.
But the pilot on this flight Captain Iriyanto had 20,000 hours of flying experience, it has been reported, and was used to flying the same short haul route.
Captain Iriyanto is said to be an experienced Air Force pilot who flew F-16 fighter jets before becoming a commercial airline pilot. Icy Conditions: One expert says ice is a more likely explanation than thunderstorms

Icy conditions could have caused the plane to stall and ‘drop out of the sky’, it has been claimed.
Pilot Ray Karam Singh told Sky News this was more likely than thunderstorms as an explanation if the plane did crash.